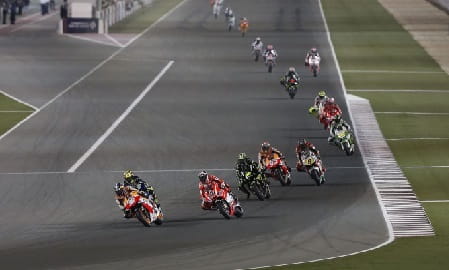 It looks like ITV Sport has bagged a deal to air MotoGP highlights throughout the 2014 season, despite it being announced last May that BT Sport had secured exclusive rights to the coverage of the World’s premier motorcycle racing series.

According to an F1 Broadcasting blog, highlights of each MotoGP race will be shown on ITV’s free-to-air digital channel, ITV4 on the Monday following each race. MotoGP will join a whole host of other motorsport content on channel, which already airs highlights of the British Superbike Championship and Isle of Man TT, plus live coverage of the British Touring Car Championship.

Last May, it was announced that BT Sport would be the sole MotoGP TV rights holder in the UK, sparking some unrest among racing fans unable to afford BT Sport’s monthly subscription fees. A similar situation occurred three years ago, when MotoGP rights holders Dorna awarded the BBC exclusive rights to air MotoGP in the UK but it eventually turned out digital sports channel, Eurosport would show the races on a one-hour delay. It had looked like such a deal would be impossible this time round, but this eleventh hour announcement will relieve those fans unwilling to subscribe to BT Sport.

30-day online TV guide, www.digiguide.tv has highlights from the first round of MotoGP at Qatar listed on ITV4 between 20:00 and 21:00 on Monday 24th March, suggesting the deal is done. 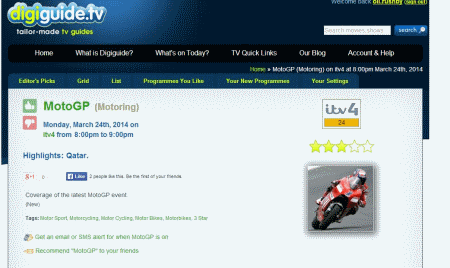 ITV, Dorna and BT Sport are yet to comment on the deal.