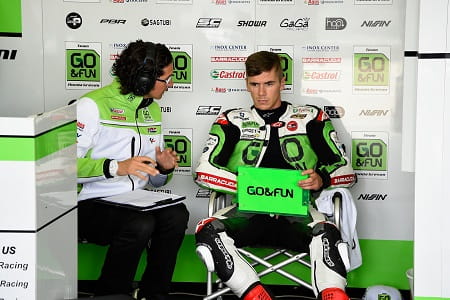 One of the worst kept secrets in the MotoGP paddock has been announced – Gresini will run Aprilia’s in MotoGP next year. But where now for Scott Redding?

In a new four-year deal, Gresini will run the new Aprilia MotoGP bike, although they haven’t announced their riders yet. Runours suggest Alvaro Bautista and Marco Melandri will get the seats. But with a huge financial investment required to step into MotoGP's premier class, where that leaves Aprilia in WSB is yet to be understood.

It also leaves an even bigger question mark over Scott Redding’s future. The MotoGP Brit currently rides in the Gresini squad, but has made no secret about opportunities to ride for the Marc VDS squad as a factory Honda rider, if he can find the right financial backing.

Team boss Fausto Gresini said: “I am very glad that Aprilia identified Gresini Racing as the ideal partner to enter the MotoGP World Championship: I would like to thank the Piaggio Group for giving me a fantastic opportunity, that is working closely with such a glorious manufacturer; an Italian brand that has become a synonymous of passion for racing, reaching amazing results worldwide.

He added: “The four years agreement between Gresini Racing and Aprilia opens a new chapter in our history: in this moment I feel a great responsibility, but the motivation to succeed in this exciting, all Italian challenge is even bigger. The Grand Prix world is part of the Aprilia brand and to represent it in the premier class, the MotoGP World Championship, is a source of great pride for all of us. An incredible reward for the work done in all these years by Gresini Racing”.