Espargaro under lap record on Day 1 in Assen 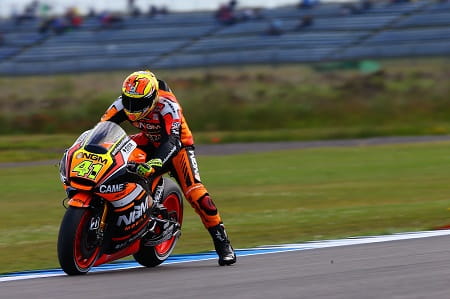 The eighth round of the MotoGP Championship got underway today at the TT Circuit, Assen. As is tradition with the Dutch TT, racing will take place on Saturday meaning the practice and qualifying sessions are also shifted forward a day. There were two practice sessions for the Grand Prix riders today around the 2.82 mile course, formerly dubbed the ‘Cathedral of Speed’.

While Yamaha were expected to be fast at Assen, with the circuit having widely favoured the YZR-M1 in recent year, it perhaps wasn’t expected that the Japanese marque would be represented at the top of the timesheets by the Espargaro brothers.

In the cool morning temperatures, the younger of the two brothers, Pol, led the way in free practice one on his Monster Tech 3 Yamaha ahead of his brother Aleix, on the NGM Forward Yamaha Open bike.

The session was dominated by Yamaha, with M1-powered machinery occupying five of the top six spots, with Jorge Lorenzo third, Bradley Smith fifth and Valentino Rossi sixth. The only exception to this rule was unsurprisingly Marc Marquez, who set the fourth fastest time on his Repsol Honda just two tenths off his former Moto2 rival at the top of the pile.

Andrea Dovizioso was the best placed Ducati in seventh, impressively ahead of the Repsol Honda of Dani Pedrosa in seventh while the satellite Honda boys of Alvaro Bautista and Stefan Bradl rounded out the top ten. Brits Cal Crutchlow and Scott Redding were thirteenth and fourteenth respectively. 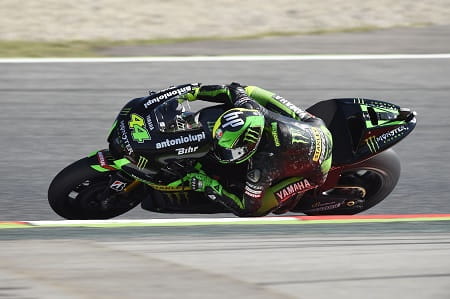 The sun came out ahead of the second practice session this afternoon; with track temperatures almost double what they were in the morning. As such it is no surprise the open-specification bikes wheeled out their extra soft tyres. It was on this tyre that Aleix Espargaro stormed to the top spot with minutes to go, smashing Casey Stoner’s lap record from 2012.

The NGM Forward Yamaha rider was chased by 2013 champion, Marc Marquez in second and an improvement his morning performance saw Dani Pedrosa sit third in the times.

Lorenzo set the third fastest time, towing Bradley Smith to fifth while Iannone was sandwiched between the pair in fifth after hooking onto the back of Marc Marquez. Valentino Rossi ended a somewhat lacklustre day in seventh position, over six tenths off Espargaro’s fastest time.

Jorge Lorenzo’s ability to lap consistently in the 1’34 bracket signals the Spaniard’s clear intention to take his first race victory of the season come Saturday, while the Repsol Hondas seemed to enjoy the afternoon’s warmer conditions slightly more than the cooler morning.

All times courtesy of MotoGP.com
or !