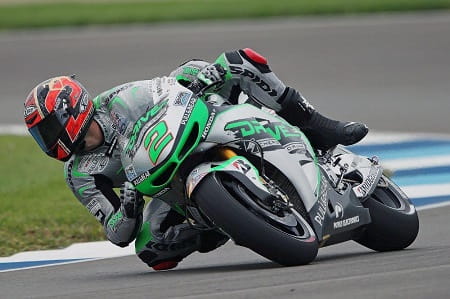 Leon Camier turned a few heads last weekend in Indianapolis as he made his MotoGP debut for Drive M7 Aspar Honda. The Brit is standing in for the injured Nicky Hayden and was thrown in at the deep end on Friday having not had chance to test the bike on top of never having ridden the Indianapolis circuit.

Camier was meticulous in his learning, knocking seconds off his lap times each session. On the first day the 2009 British Superbike Champion improved his lap time by over three seconds. Further improvements on Saturday saw him qualify in an impressive sixteenth place, ahead of his team mate Hiroshi Aoyama and just 0.9 from Scott Redding on the top RCV1000R.

Unfortunately race day saw Camier plagued with issues, eventually retiring from the race with a faulty sensor. In the grand scheme of things his result matters little, the Brit was the talk of the MotoGP paddock. Considering he’d never ridden the bike or had any prior experience of MotoGP technology plus didn’t know the track yet still finished ahead of his former World Champion team mate… he’d done pretty well.

With MotoGP now heading to Brno, Camier will get a shot at a circuit he knows and now he’s familiar with the bike, who knows what damage he could do.

“Even though I didn't manage to finish my debut MotoGP race at Indianapolis I learnt a lot of things – mainly in terms of the direction we need to go with the chassis set-up and what I need to do to ride this bike fast” said Camier.

“Hopefully at Brno we can continue working in the same way. I felt more comfortable with every passing lap of Sunday's race and understood what I needed to do to improve my pace, so I think that will be an important step for us going into this weekend at a circuit I know well.”