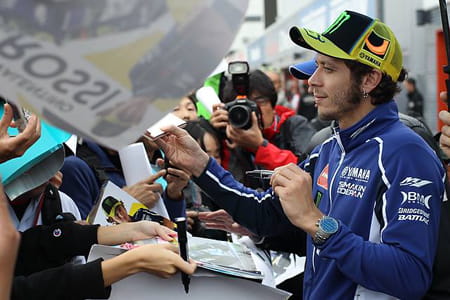 Valentino Rossi has announced his intention to stay in MotoGP for two more seasons. The nine-time World Champion made his desires clear in an onstage interview after introducing the new MT-09 Street Rally at Yamaha's Model Year 2014 World Premiere in Milan.

Rossi returned to Yamaha this season after a disastrous spell with Ducati and although 2013 has been an improvement for 'The Doctor', he's not been setting the world alight either... Just one win and a handful of podiums have come the way of Rossi since his return to the Japanese manufacturer, leading to many rumours the Italian could leave MotoGP when his current Yamaha contract expires at the end of 2014.

The 33-year-old soon quashed these rumours, telling Suzi Perry he'd like another two years in the elite class before moving on. “Next year is sorted, I have the contract! I'd like to be in MotoGP for another two seasons, I still enjoy it a lot so it would be good, we will see what happens.”

Whether Rossi will remain with Yamaha for 2015 remains to be seen with some predicting a move to Suzuki to join his good friend and advisor, Davide Brivio. It's far too early for that kind of speculation though...