What a weekend for Britain’s racing hero, Scott Redding!  Confirmed as a MotoGP rider with the Gresini Honda Team on Thursday.  Fast all weekend at his home Grand Prix. Stood on the top step of the podium on Sunday and adored by his home fans.

For the first time in 37 years a British rider in the intermediate class won their home Grand Prix and it was a thoroughly deserved victory in a race that Scott himself described as “perfect”.

Talking to Bike Social after the race, Scott said “(It was) pretty intense but relaxed at the same time, because there was a lot of pressure but I use it as motivation and support.  Actually, I was really calm and really consistent and really happy with how not only Sunday but the whole weekend has been.” 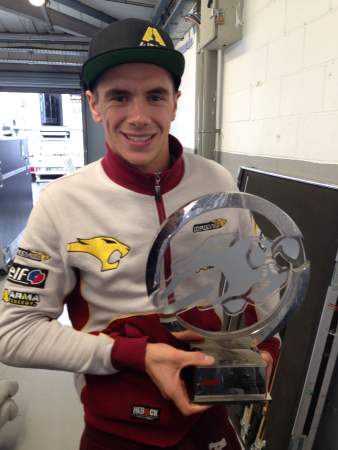 The 20 year old pushed hard during qualifying on a warm Saturday afternoon but just missed out to the Japanese ride, Takaaki Nakagami, who claimed back-to-back pole positions following the Czech Republic round last weekend.

“I think the crowd definitely gives me a tenth of a second, just to know you’ve got that support it really gives it that last little bit.  Like in qualifying my last five laps were over the limit to be honest.  I wanted to get on pole but missed it by zero, zero, zero, you know.  I’m happy to come away with the win on Sunday of course, that’s when the points come, I can’t ask for more than that at my home grand prix.”, he said.

Redding started well and got the holeshot, leading the pack into Copse, he stayed in control of the race only being overtaken for a handful of laps by Nakagami but once Scott had re-established his lead at Village it was Luthi and Nakagami who battled for second allowing Redding to stretch away.  He said, “The start was really good and I got my head down and bang, bang, bang trying to put those good laps in and when I got overtaken in the race it didn’t unsettle me but it’s something that makes you realise that I still wanted to win it, I had that mentality today.  Just how the race went was perfect for me today.” 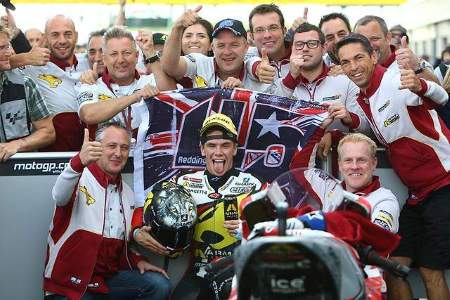 The winning celebration was one to be admired.  Not only did the Gloucestershire man have special red, white and blue leathers, gloves and boots but his Shark helmet also adorned the face of a wolf and clearly he’d been working on that celebration.  We’ve seen special winning moments from the likes of Toseland, Rossi and more recently Lorenzo and his cobra arm but on the warm down lap Redding jumped off the bike headed into the gravel trap and in front of thousands of race fans got on all fours and pretended to stalk his prey like a wolf!

Redding is now 38 points clear at the top of the Moto2 World Championship with his main rival, Pol Espargaro, coming home 8th, losing him valuable ground in the Championship race which was an unexpected bonus for Redding who only found out when he came into parc ferme at the end of the race.

With only 6 rounds remaining in the title fight, Scott ‘The Wolfman’ Redding’s three race wins and points scoring consistency are fuelling his fans desires to see him start his MotoGP career as Moto2 World Champion.