Scott Redding: "I was riding to the limit" 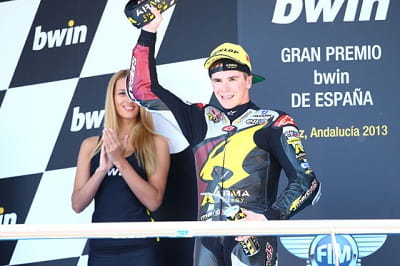 Marc VDS Moto2 rider Scott Redding showed yet again why he’s a consistent threat for the Moto2 World Championship with a grown-up ride to second place at Jerez.

The race was won by Esteve Rabat who now leads Redding by one point in the Moto2 World Championship.

Bike Social supported rider Scott Redding is now off to a two day test at Aragon in Spain. He told us: “It was a strange race really. I'm full of cold at the moment, so the fact that it just got hotter as the race progressed meant I was fatiguing towards the end.”

“I’m happy with second position you know, I knew it was going to be hard with Rabat, he had a little bit more over me and he just took a bit more every lap. Every lap it was just a little bit, as little bit, in the end I couldn’t really retaliate because I was on the limit you know, so I tried my best and I was pushing with him and I could control the gap from behind with Nakagami. I knew I could kind of push for second in the race and it’s the points that matter in the championship.”

“At the start Rabat managed to creep away; it was just one or two tenths a lap, but it was enough to pull away. I tried to go with him, but it was feeling a little bit risky so I backed off to do my pace, that I knew I could maintain. It worked out pretty well. The tyres were spinning up a bit, but my lap times were okay, it's just that Rabat was quicker today and I just have to accept that. I'm happy to be on the podium again”.

He added: “I’m really looking forward to the test and can’t wait for Le Mans.”