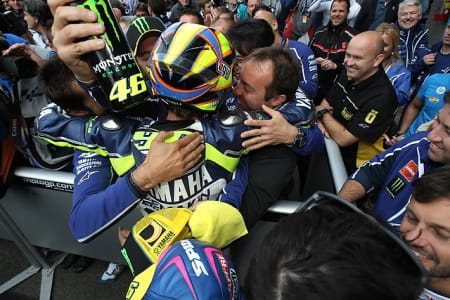 Valentino Rossi claimed his eightieth premier class win this weekend at the iconic Assen TT. Britain’s Cal Crutchlow - who started on pole - was relegated to fifth position by the first corner as one of Pedrosa’s trademark fast starts saw him shoot into the lead from Stefan Bradl, who had seemed to find some pace this weekend following switching to Brembo brakes. Marc Marquez piled into the first corner in third despite pressure from Yamaha’s Valentino Rossi.

Bradl fell back quickly while the two Repsol Hondas and Rossi started to break the pack. It didn’t take Jorge Lorenzo - racing after breaking his collarbone just two days previously – long to break through the pack. He was fifth by the third lap, ahead of pole-sitter Crutchlow. An eager Rossi passed Marquez on lap five and slipped past leader, Pedrosa on the sixth lap and didn’t look back as he pulled away to claim his first win since Sepang 2010. The initial race leader then started to fall backwards as he lost two positions in quick succession to both his team mate and Cal Crutchlow, who had managed to get back ahead of a hurting Lorenzo.

It looked as though Crutchlow may be in a position to claim second as they went into the last lap, although Crutchlow slightly over-cooked it into turn one narrowly missing the back of Marquez’s RC213V. Fortunately the Brit had a comfortable enough lead on Pedrosa to remain third and claim his third podium of the season. Pedrosa finished fourth from Lorenzo, Bradl and Bautista. Espargaro put in a good performance to finish in eighth ahead of Bradley Smith and all four Ducatis. The Italian manufacturer seeing only one of their Desmosedici’s in the top ten.

In Moto2 despite Scott Redding’s best efforts, Pol Espargaro secured his third victory of the year with a last lap move at turn one while in Moto3, Luis Salom, Maverick Vinales and Alex Rins continued their domination, taking first, second and third respectively.