Rise of a MotoGP rookie

MotoGP rookie Marc Marquez is riding the crest of a wave after clinching his first victory on his second-ever outing in the MotoGP class at the Circuit of the Americas in April, breaking Freddie Spencer’s record of being the youngest rider to win a MotoGP race in the process. The 20-year-old Spaniard now heads to his home round at Jerez this weekend, tied at the top of the championship standings with reigning MotoGP Champion Jorge Lorenzo. 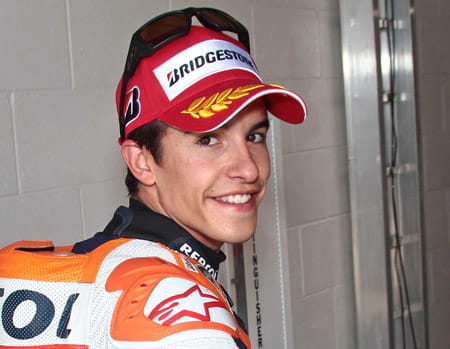 We caught up with Moto2 Champion Marquez to see how he’s finding his first season in the premier class, and whether he hopes to break any more records this year...

Taking every race as it comes
“For me, breaking the record set by such a legend as Freddie Spencer is really special, but now I have to be focused on the job at hand. I have to improve my riding every day, and the most important thing for me is to approach each race individually.

“I’m looking at 2013 as a ‘training year’. It’s a year for me to learn to control lots of things – from technical considerations to actually riding. Of course it would be perfect to finish in the top three riders, but I know this will be really difficult, especially at the European rounds. Many other riders have a lot more experience with their bikes than me – they know how to prepare them. I will do my best to be at the front of the field, but I have no references in MotoGP. Once the year finishes, we’ll see where we are.”

From Moto2 to MotoGP
“In order to get the best out of my bike, I have to hang off it more than I did in Moto2! The MotoGP bikes have a lot more power and I have had to learn how to take advantage of my position in order to get a better exit out of the corners. Dani Pedrosa’s riding style is a great reference point – he’s perfect at raising the bike in curves.”

Recovering from injury
“The eye injury I sustained at the Malaysian Grand Prix last year has helped me to mature quickly and learn how to prepare myself mentally. Now, everything is fully healed and I have perfect vision thanks to Dr. Sanchez Dalmau. I may well get injured this season, but like other racers, I don’t think about the risks."

Family time is important
“Ever since I was little, my family have been by my side – they are very important to me. They also come to the races to see me. However, now I’m a professional rider, they know that it’s my job, so they respect me a lot.”

The third MotoGP race of the season takes place at Jerez, Spain on Sunday 5 May.