Redding: my performance was "not acceptable"

His main rival throughout the season has been Spain’s Pol Espargaro who came home in 2nd place behind his team-mate Esteve Rabat who is making his own late season surge for the title having taken two wins and two further podium finishes in the last six races.  With three races remaining this season, just 28 points cover the top three riders and with 25 available for a race win, it could well go down to the final round in Valencia on 10th November. 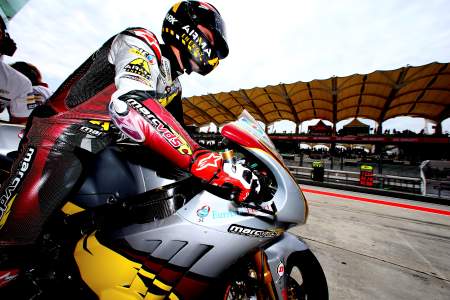 Speaking to Bike Social after the chequered flag had dropped, an evidently annoyed Redding explained, "I've got to start winning again, I've been off the podium these last few races and it's not acceptable".

His recent form has dipped at a crucial part of the season with no visits to the podium in the last three rounds since his epic victory at Silvertstone at the beginning of September.

It wasn’t a great weekend for Redding, the Moto2 Championship leader, who struggled for straight-line speed, a common occurrence for the rider who is taller and heavier than most of his competitors but which is accentuated on the Sepang circuit where the 3.5 miles circuit contains two long straight’s, one of which is over ½ mile.

The 20 year old MarcVDS rider had qualified down in 10th position having suffered with a lack of rear traction out of the corners as well as catching back markers at inopportune parts of the track during qualifying but made a great start picking his way through the pack to sit 4th after the first two corners.  It was already looking promising as he caught and passed Espargaro into the last corner on lap 1.  However, further back down the field and five bikes tangled in a nasty looking incident which brought out the red flags. Thankfully everyone involved was ok, unlike the twisted mess of motorcycles that lay strewn across the track.

The 19-lap race became a shortened 12-lap version and at the re-start where the grid was formed in the original order Redding made a reasonable getaway but almost got involved in a first corner domino-effect crash which saw Zarco tap Simeon who in turn took out De Angelis giving Redding cause for concern as he took avoiding action.

"I saw it coming out the corner of my eye and I was lucky not to be taken down but it left me down in 12th or 13th.", he explained.

It did indeed push the Gloucestershire man back to 13th but he re-grouped and picked off the places to get as high as 6th knowing that the normal tyre-wear issues which have haunted him in the past were unlikely to return given the reduced race distance. 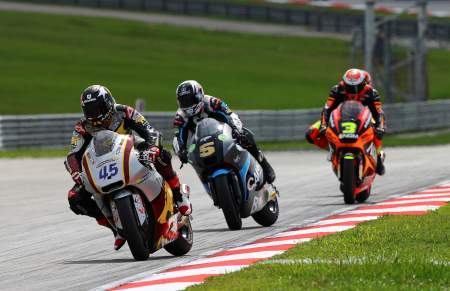 Scott held onto 6th place, just three behind Espargaro until late in the race when his main rival caught and passed Luthi for 2nd whilst Zarco took advantage of Redding’s late, late braking into the final corner and managed to pip our man to the line by 5/100th second.

He said, "I could see him coming, the tyres were ok until about two laps from the end but I was losing 2/10ths every lap on each straight which was annoying.  But he went up the inside so I tried to outbrake him down the outside and squared the corner off.  As we went from 2nd to 3rd he's lighter so got the place".

The Championship heads to Australia next weekend with only three rounds remaining and therefore a maximum of 75 points on offer.

A determined Redding who likes Phillip Island because of its flowing nature is out to make amends.  "I'm going there for the win and I want to be fast from the first session, whatever the weather. I've got to get this Championship wrapped up."

Hold on tight Moto2 and Scott Redding fans…this is going down to the wire!

Who do you think will take the title? or !