Redding wiped out of Moto2 title challenge at Motegi 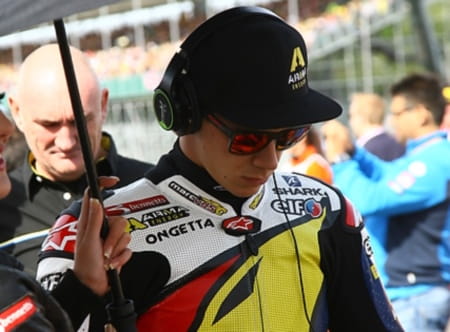 Scott Redding’s dreams of taking the Moto2 title were smashed this morning in Japan as the rider became caught up in an incident involving Esteve Rabat on the first lap of the Moto2 race. Rabat fell in front of Redding leaving the Brit with nowhere to go. Redding struck Rabats bike, throwing him from his MarcVDS Kalex onto the floor where he bounced numerous times on the asphalt.

All this comes just one week after Redding fractured his left wrist in a qualifying incident in Phillip Island, marking a heroic return from the Gloucestershire youngster. After free practice sessions at Motegi were cancelled due to weather, Redding’s return to the track would take place in the extended qualifying session on Saturday afternoon. Fast in the wet, the rider faded in the dry as he opted not to take risks on a slightly damp track ending up fifteenth.

Redding had moved into the top ten by the time of the incident, which brought out the red flag, stopping the race. The twenty year old was taken to the medical centre where it was revealed he had suffered no serious injuries and no further damage to his injured left wrist. Redding left the medical centre in time for the restart, however damage to the bike was far too substantial to be fixed in time.

Pol Espargaro made a lightening start from seventh on the grid straight up to second by the first corner. Despite the best attempts of Mika Kallio, Espargaro took the lead in the early laps and didn’t look back. Victory for the Spaniard would extend the championship lead to an uncatchable forty-one points.

“When Tito went down in front of me I did everything I could to avoid him, but I couldn’t avoid hitting the bike and I went down too” explained Redding.

“It’s disappointing, obviously, not just because of everything we’ve been through just to race here this weekend but also because there was nobody left to take the fight to Pol with both Tito and me out of the race. The championship is gone and, although it wasn’t through want of trying, that doesn’t make it any easier to accept. The important thing is to get over it, come back strong and finish the season on a high at Valencia. Congratulations to Pol on winning the title; it was a good battle and I’m just sorry we couldn’t take it down to the wire.”