Pedrosa wins while Marquez plays it cool in Sepang 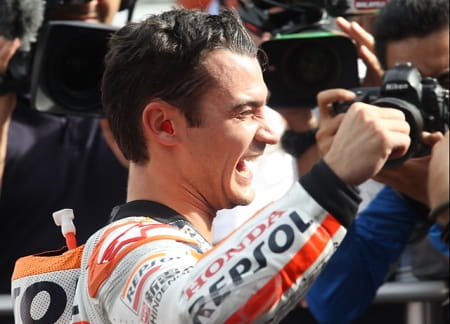 Dani Pedrosa was ecstatic to take victory in the Malaysian Grand Prix this weekend, beating his team mate for the first time since Barcelona and taking his first win since the fourth round in Le Mans.

It was Yamaha’s Jorge Lorenzo who took the lead at the first corner, although the Mallorcan was soon batted back by the Repsol Honda in a close fought first couple of laps, with Marquez, Rossi and Bautista also in the mix.

Marc Marquez settled into third despite several attempts from Italian veteran, Rossi to get in the mix. The young Spaniard then set after championship rival, Jorge Lorenzo. Already thirty-nine points behind, Lorenzo wasn’t willing to give up second place easily. The pair exchanged both positions and paintwork over the next few laps (the paintwork at the fault of Lorenzo, this time) until Marquez managed to secure second position.

While the two younger Spaniards had been fighting tooth and nail, Pedrosa had built somewhat of a substantial gap. Would Marquez chase him down, or would he play it safe knowing he was ahead of his closest championship rival? The twenty-year old explained after the race that he had tried, but thought twice about it: “I tried to reduce the distance that Dani had put between us however I saw that it was too risky to do so. From that moment on, I decided to focus on keeping Lorenzo at bay because the goal here was to finish the race ahead of him.”

Marquez left Lorenzo with little choice but to watch his chances of retaining his title. “He was much stronger today so we couldn't do much more. To win the championship is almost impossible but I would like to finish second in the championship and win as many races as possible” the Spaniard confessed.

On winning, Pedrosa commented: ““I am very happy with this win, as it is very special. My level of riding today was very good and the victory comes after a difficult week – in which I was laid up in bed and could hardly move. To come here and win is fantastic, so thanks to all my team!”

Valentino Rossi took his seventh fourth place of the season followed by Alvaro Bautista, who had been involved in an intense battle with Cal Crutchlow throughout proceedings. Smith finished behind his team mate to record a seventh placed finish ahead of the Ducatis of Dovizioso, Hayden and Hernandez.

In Moto2, Scott Redding saw his championship lead halved after a 1-2 from the Pons team of Rabat and Espargaro. With Rabat now just twenty-points behind his team mate and thirty behind Redding, the intermediate class is very much turning into a three-way battle.

Marquez now leads the championship by forty-three points and can clinch the title in Australia next weekend with a win if Lorenzo finishes third or lower.

Luis Salom returned to the podium in style after two fourth place finishes, the Spaniard won in Malaysia to extend his championship lead to fourteen points. Alex Rins took second while Mahindra scored their debut podium with Miguel Oliveira in third.