Pedrosa triumphs at home round 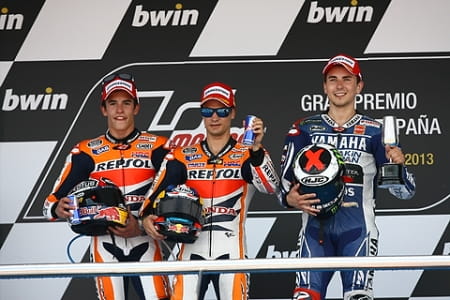 Dani Pedrosa has secured his first win of the 2013 MotoGP World Championship at the Circuito de Jerez this afternoon. The Repsol Honda rider used his second place qualifying position to his advantage – overtaking polesitter Jorge Lorenzo almost as soon as the 27-lap race began.

Although Lorenzo initially fought back against Pedrosa, the reigning MotoGP Champion began to fall into the clutches of Pedrosa’s team-mate Marc Marquez. Clearly hungry for victory after his maiden win at the last event, the MotoGP rookie, who began the race from the front row of the grid, made a dramatic move at the newly-named Jorge Lorenzo corner on the final lap, demoting an unhappy Lorenzo to the third step of the podium.

Just three rounds into the series and Marquez now tops the championship standings with 61 points, while second placed Pedrosa is just three points behind. Yamaha's Lorenzo completes the top three riders ahead of the fourth round at Le Mans with 57 points.