Pedrosa talks about his championship chances 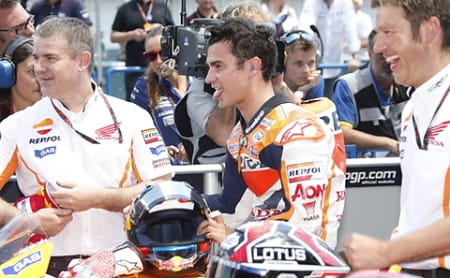 Having been in the MotoGP paddock for eight seasons, Dani Pedrosa is one of the most experienced riders on the grid. With Casey Stoner leaving after 2012, Pedrosa came into the 2013 season as Repsol Honda’s number one rider. After winning two races and only finishing off the podium in the opening round at Qatar, Pedrosa leads the championship by seven points. We caught up with him after Catalunya to discuss the rest of the season, his new speedy team mate and how long he’s planning to stay in MotoGP.

You’ve had a strong start to the season; you currently lead the championship from Jorge Lorenzo. What is your strategy for maintaining the strong performance?

“I’m focusing on each race as it comes and trying not to look too far into the future. I’m so happy I finished last season strong, without injury and I’m working on keeping the momentum. I’m also trying to improve areas of my riding that I’m not totally happy with to develop myself as a rider.”

A lot of pundits are saying that this year is the best chance you’ve had in your MotoGP career to win a world title. What do you think?

“I try not to think too much about this, I want to remain focused. I have put in the work and I have a good program so together with my team this should be enough to have a good chance.”

In terms of the race for the title, you and Jorge are definitely the two favourites and are very strong at the moment. Marc is also showing a lot of speed and Valentino showed it at Qatar, would you say these two are also in with a chance of the title?

“Of course! Marc is showing how fast he is and you cannot rule him out in the race for the Championship. It will be difficult for Valentino but we know his ability and we are still very early in the season.”

Lorenzo has used 4 out of his 5 engines so far and we’re not even half way through the season. Do you expect him to have problems towards the end of the season?

“I’m not sure to be honest, this is something Yamaha have to deal with so thankfully it’s not our problem!”

Marc has joined you at Repsol Honda for 2013 and he is clearly very fast, what do you think it is that makes him so fast?

“I don’t know – ask him! Sure he has a great talent which we already saw in Moto2, but he is also learning very quickly.”

Obviously you are a lot more experienced than Marc, you’ve made a few comments to the media about him copying your set up and style but do you think there’s anything you can learn from him?

“We have an ‘open book’ policy at HRC on all our data, and I didn’t say he’d copied my settings, this was lost in translation. I was asked if I was surprised at his performance in Mugello and I said I wasn’t as we were using the same set up. If one rider finds something beneficial then it’s up to the Technical Director to decide if he shares this with other HRC riders.”

Valentino Rossi is struggling to run the same pace as you and Jorge – you’ve all set the bar a lot higher since he was last on a competitive motorcycle. Do you think in the next year or so Marc could set the bar higher for you and Jorge?

Despite having been in MotoGP a long time, you’re still quite young. How many more years do you plan to race in the MotoGP championship?

“Haha. I don’t know, I’m still enjoying my racing and I still want to win the Championship. As long as I can keep avoiding injury and enjoying my sport, I don’t think about these things."