Pedrosa and Lorenzo to play catch up at Indianapolis 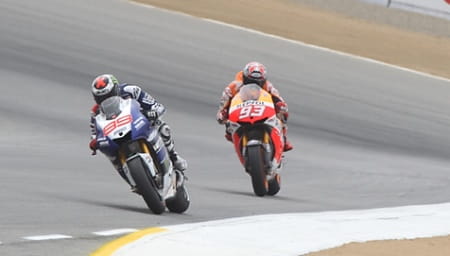 The MotoGP championship resumes in Indianapolis this weekend after a few weeks off for the summer break. Young Spaniard, Marc Marquez leads the championship as the series heads to the brickyard and as he rightly points out in Repsol Honda’s pre-event press release – Lorenzo and Pedrosa are the ones under pressure.

Marquez has almost twenty points over Dani Pedrosa with Jorge Lorenzo a further ten points behind, so the two title favourites certainly have some catching up to do after both suffering collarbone injuries during previous rounds. Having had almost a month to recover following the last round at Laguna Seca, both riders claim they are fit and ready for battle.

Pedrosa won at Indianapolis at this point last year from Lorenzo in second although Marc Marquez isn’t without experience of victory at the American circuit, he won the Moto2 race in both 2011 and 2012. Jorge Lorenzo hasn’t won at the circuit since 2009; however with such a deficit in the title chase he’ll be keen to take the win.

Valentino Rossi took victory in the first ever MotoGP race at Indianapolis, he’ll be keen to take his second victory of the year to rejuvenate his title fight after taking just his fourth podium of the year at Laguna Seca.

After a poor showing last time out, Britain’s Cal Crutchlow will be looking to make an impression on the Tech 3 Yamaha, he’s never finished in the top ten at Indy so will be looking to return to form in his last race in America for Yamaha before his move to Ducati in 2014.

LCR Honda’s Stefan Bradl will be looking to carry on the momentum from his second place finish (and first ever podium) last time out in Laguna Seca. The announcement of Crutchlow’s move to Ducati would suggest Bradl’s seat could well be safe for 2014, but he won’t want to give LCR or HRC any reason to change their minds.

Ben Spies returns to MotoGP at Indianapolis after the first half of his season has been plagued by injury, the Texan has had considerable success at the circuit in the past. He took one of his four podiums with the Factory Yamaha Team at Indianapolis, although on a Ducati Desmosedici hopes of a repeat performance are nothing more than a dream.

Nicky Hayden could well be racing his last Grand Prix race in America if recent rumours are to be believed, so he’ll be looking to impress his home fans if possible. His best result this season has been fifth at Le Mans.

In Moto2, Scott Redding will continue to fend off a charging Pol Espargaro while in Moto3 the three-way title battle is set to continue, with Luis Salom currently leading from Maverick Vinales and Alex Rins.