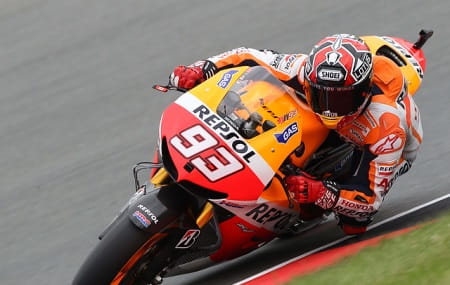 One of the main problems people seem to raise about the Motorcycle Grand Prix World Championship is the lack of unpredictability. Well, you certainly can’t say that about this weekend. Throwing out the unexpected from the very first day the race had potential to be more exciting and unpredictable than we’ve seen in some time.

World Champion, Jorge Lorenzo was thrown from his Yamaha M1 in the second practice session on Friday sustaining further injury to the collarbone he broke two weeks before in Assen. The Spaniard was flown back to Barcelona and ruled out of the race, leaving the door open for Dani Pedrosa to extend his lead in the championship… until he suffered a ginormous high side on Saturday morning subsequently ruling him out of the race too. Yup, that was the two main championship contenders sitting out while the pace within the rest of the field was reasonably close… Who would win? Would Rossi become the oldest back-to-back winner in thirty years? Would Marc Marquez win and take the lead of the championship or would Cal Crutchlow or Stefan Bradl become the first rider to win on satellite machinery since Toni Elias in 2006?

Marquez drew first blood by putting his Repsol Honda on pole position from the Yamahas of Crutchlow and Rossi and the first few laps of Sunday’s race were quite incredible. Rossi took the lead in the first corner from an eager Stefan Bradl who took no time in getting past the aging Italian. An incredible start from Aleix Espargaro on his Aprilia ART machine (yes, the CRT) saw him in third in the early stages of the first lap but he was soon displaced by a charging Marc Marquez who passed the Aspar rider and Valentino Rossi before taking the lead from Stefan Bradl. Bradl continued to fall back after his strong start while Cal Crutchlow started to put in a pace similar, if not a little faster than Marquez. He passed Rossi and started to close the gap to the disappearing Honda and despite hopes of the Brit catching the youngest ever GP winner and making a pass, the gap was maintained at around 1.5 seconds.

Visibly disappointed not to have carried forward his Assen form, Valentino Rossi crossed the line in third followed by Stefan Bradl and Alvaro Bautista. Britain’s Bradley Smith finished sixth followed by Dovizioso and Espargaro. Nicky Hayden and Michele Pirro rounded out the top ten. Marquez’s win means he now leads the title chase by two points and with Lorenzo out and Pedrosa uncertain for Laguna, this could very much be a three way fight until the end.