Lorenzo fends off Marquez attack to win at Silverstone 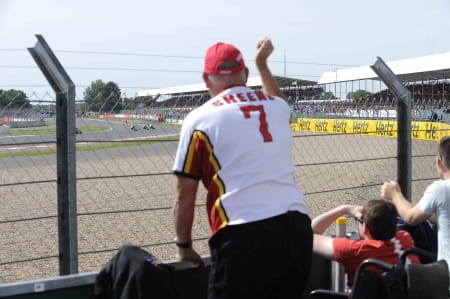 There were high expectations for the British Grand Prix at Silverstone this year. MotoGP has one of the best battles at the front of the championship that it’s had for many years and Great Britain has a rider with more potential for a home GP victory or podium than any British rider has had in recent years and it didn’t disappoint.

After a stunning performance in qualifying, Spanish rookie Marc Marquez was by far the favourite for the race win. However, drama struck at the eleventh hour as the twenty-year old fell in warm up (narrowly avoiding Cal Crutchlow and a group of marshals) dislocating his collarbone. Fortunately, the collarbone was popped back in by medical staff and while Marquez was a bit battered, he was passed fit for the race.

Jorge Lorenzo took the hole shot with Marquez behind him. It was initially Valentino Rossi in third until he was taken by Stefan Bradl. However after a few laps, Dani Pedrosa had fought his way into the top three with the pack then pulling away. Glued together throughout the entire race, Lorenzo, Marquez and Pedrosa held position until the final few laps, where Marquez attempted a pass on his fellow Spaniard. Lorenzo came back at him and the final outcome was to be decided on the last lap. Marquez stalked Lorenzo around the curves of the Northampton circuit with Pedrosa close behind and it would be into Brooklands where Marquez would attempt a potential race-winning manoeuvre. Lorenzo however, had other ideas. As Marquez passed the Mallorcan into Brooklands, Lorenzo shoved it back underneath through the penultimate corner to take victory across the line by just eight hundredths of a second.

In the Moto2 race, Britain’s Scott Redding took the victory from Takaaki Nakagami and Tom Luthi.