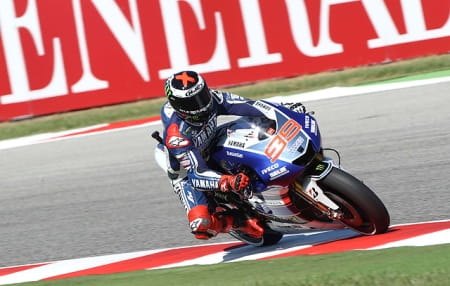 MotoGP World Champion Jorge Lorenzo asserted his dominance yesterday afternoon in Misano, as he took the lead of the Grand Prix at the first corner and didn’t look back until he crossed the line almost thirty laps later.

After one of his trademark starts, it was Dani Pedrosa in second place from championship leader Marc Marquez. Hometown hero Valentino Rossi followed in fourth (once he’d got past Aleix Espargaro who jumped the start). Rossi moved up to third at one point as Marquez sent himself wide attempting to pass his teammate however it wasn’t long before the young Spaniard got back up to speed and passed the ageing Italian.

Marquez then set after the number 26, passing him at around three quarter of the way through the race. Pedrosa, eager not to be beaten by his rookie teammate yet again, retaliated however it wasn’t long before he was forced into admitting defeat leaving him to take yet another lonely third.

With Lorenzo on fine form, hammering in impressive times throughout it would have been a mammoth task for Marquez to catch the Mallorcan – not that mammoth tasks have stopped the Repsol Honda man before. Lorenzo cruised over the line to victory knowing he’d re-take second in the championship and taken five more points from the lead of Marquez.

Bradl finished fifth after a last lap move on Cal Crutchlow. Bautista brought it home in seventh ahead of a trio of Ducatis in the shape of Dovizioso, Hayden and Pirro.

In Moto2, Pol Espargaro gained vital ground on championship rival Scott Redding. The Spaniard one the race while the Brit could only manage sixth. Takaaki Nakagami and Esteve Rabat rounded out the podium. Alex Rins made up some valuable championship points in Moto3 ahead of Maverick Vinales and Alex Marquez. Championship leader, Luis Salom finished fourth.