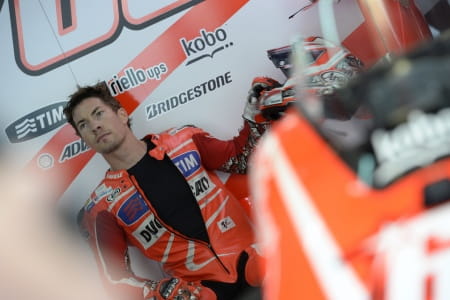 Jorge ‘Aspar’ Martinez has confirmed his team will switch from Aprilia machinery to Honda with their production racer for the 2014 MotoGP World Championship. The Spaniard also confirmed Nicky Hayden, who will return to the manufacturer with whom he took the 2006 MotoGP title.

Paddock rumours have had Hayden placed in the Aspar squad for quite some time as a replacement for Aleix Espargaro, who is moving to Forward Racing to ride a Yamaha M1 with spec-ECU. However, it was originally thought the deal involved Aprilias, something Hayden even admitted.

Despite talks of Aspar receiving significant support from the Italian factory for 2014, it’d seem the former 125cc World Champion has made an eleventh hour switch to Honda, despite the deadline for securing the lease of Honda’s production racer passing in July. It is thought the departure of Aprilia boss, Gigi Dell’Igna to Ducati may have influenced Aspar’s decision to distance himself from the Noale factory.

It is expected that former 250cc World Champion, Hiroshi Aoyama will join Hayden although this is yet to be confirmed. It is thought this announcement will finalise Honda’s production line up for 2014, with the other two bikes being with Scott Redding at Gresini Honda and Karel Abraham.

Where this leaves Eugene Laverty - who was tipped to join Aprilia in MotoGP after being dropped from their WSBK effort – remains to be seen.