4,000 race fans are expected to converge on Silverstone on Thursday 29th August for the ‘Day of Champions’, ahead of the British MotoGP weekend.  Since Kenny Roberts Snr. created the first Day of Champions back in 1990 at Brands Hatch the event has traditionally been focused on providing the opportunity for MotoGP fans to see their hero’s and bid for a range of signed boots, leathers, t-shirts and more with thousands raised on behalf of Riders for Health, the official charity of MotoGP. 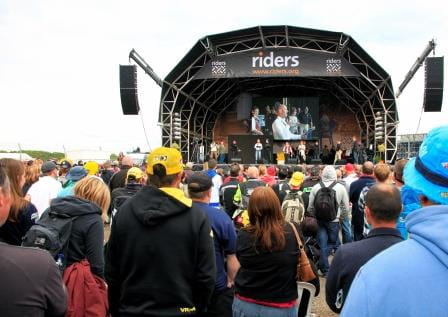 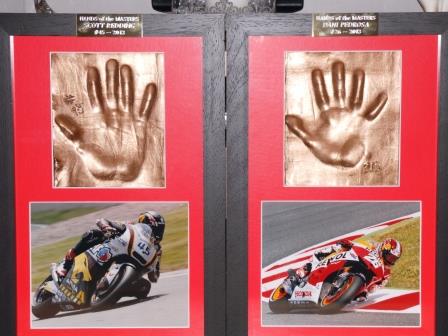 As well as the auction the Day of Champions stage will also see Matt Roberts and Steve Parrish, host and commentator from BBCs MotoGP coverage, in charge of the ‘A Question of Bikes’ quiz whilst Eurosport commentator Julian Ryder will interview young Moto2 and Moto3 riders coming through the ranks.

Barry Sheene and John Cooper’s bikes will be on display as part of the classic bike collection, The Animal Action Sports Tour will combine the incredible skill, control and balance of World Champion trials rider Martyn Ashton with the spectacular aerial style of Blake Samson.  Other entertainment comes in the form of live music and stunt shows.

Tickets start at just £15 and, with children under 16 going free. To book tickets, simply visit the Silverstone website or call the Silverstone ticket line 0844 3750 500.  All the money raised directly supports Riders for Health’s life-saving work in Africa.

And finally, on the afternoon of Saturday 31st August, a Yamaha YZFR-125 signed by Valentino Rossi, Jorge Lorenzo, Cal Crutchlow and Bradley Smith will be auctioned.  But it’s no ordinary 125, one side of the bike replicates the Yamaha Factory Racing Team whilst the other side is designed in the style of the Monster Yamaha Tech 3 bike.