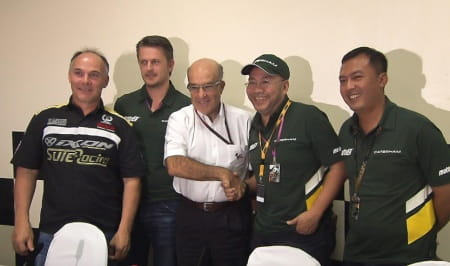 Caterham Group have announced (as expected) that they will be joining the Moto2 Grand Prix grid from 2014 onwards under the banner of Caterham Moto Racing Team.

The team have confirmed 2013 AMA Superbike Champion, Josh Herrin will join the outfit for the 2014 season in what is set to be a two-rider line up, with Frenchman Johann Zarco expected to soon be announced as the second rider.

Former 250GP racer and World Superbike team manager, Johann Stigefelt will be at the helm as Team Manager and a deal has been reached with Swiss manufacturer, Suter.

Herrin confirmed he’d move to Moto2 after winning the AMA title at Laguna Seca two weeks ago however did not allude as to with which team. Following the announcement, he said: “I could not be more excited about the opportunity to race with the Caterham Moto Racing Team. It has been a goal of mine since I was young boy to race in the World Championship and it seems almost surreal now that the opportunity is finally here. I have been training very hard and I am ready to fight for great results in the super competitive Moto2™ class. I can’t thank my manager Bob Moore enough for working so hard to get me on the best team for next year, and I want to thank everyone at Caterham Moto Racing Team for helping make my dream come true."

Speaking at the Malaysian Grand Prix, Co-Chairman of the Caterham Group said: “I am delighted to confirm that we have had our entry into Moto2™ accepted, and to be able to make this announcement at our home track of Sepang is a proud moment. Through AirAsia, Tony Fernandes and I have been passionate supporters of motorbike racing for many years and the establishment of our own team in Moto2™ is the natural next step for Caterham Group.

“I am also very pleased to confirm our first rider, Josh Herrin, who is a very exciting talent and comes to us as the reigning AMA Superbike Champion. He shares our belief that we can achieve the ambitious goals we are setting for 2014 and beyond and we are all excited about seeing him continue to develop on the world stage. We are also going to continue to support Fahmi’s burgeoning career in Moto3, a young Malaysian rider whose potential develops every season.

“In addition, we can now confirm that we have signed a technical partnership with Suter Racing Technology for the supply of chassis. This is a pragmatic move, one that gives us access to proven design and manufacturing skills and allows us to build our team with the best possible partners from day one.

“This is another exciting milestone in the life of Caterham Group, and Tony and I are already looking forward to seeing Caterham Moto Racing Team line up on the grid at the Losail Circuit in Doha, Qatar at its first race in 2014. With the team we are putting in place we have a strong chance of making good progress in our first year, and for many seasons to come.”