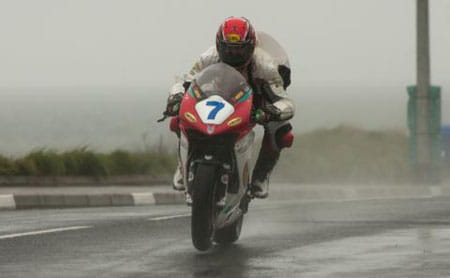 With six years’ Isle of Man TT experience already under his leathers, Gary Johnson is approaching his seventh year in the famous road races with victory set firmly in his sights. The North Lincolnshire rider clinched his maiden win on the island in 2011, and with the support of the Valmoto MV Agusta Supersport team, which is spearheaded by experienced team owner and manager Jack Valentine, the focus is very much on the next win.

Earlier this week, we asked fans of our Facebook page to submit their questions to Gary. We caught up with him in between the busy practice schedule (and the rain!) to see what he had to say…

Colin Dickson: Have you been able to improve the bike(s) since the NW200?

“We have done the least amount of work on the Superbike since pre-season and only made a few small adjustments. The MV Agusta F3 Supersport bike has had a new Akrapovic exhaust system, among other things, since the NW200, which has given it more mid-range and top-end power.”

Steven McNee: How is the bike running and handling?

“I’m really happy with the MV Agusta F3 at the moment – it’s pretty fast! The handling is consistently performing at around 90% however when the bike performs to its potential the handling is about 95-96%. When it comes to a bike’s handling there’s always bits that can be improved though.”

Jonathan Wilson: How do you prepare pre-race – physically and mentally?

“I always like to spend a little bit of time on my own just to get my head in a good place. Then I usually do a few exercises to get my body ready while making sure I’m drinking the right stuff! Once I get on the bike and prepare to reach speeds of 200 mph, I like to visualise the corners and the track I’m about to ride.”

Andrew Campbell Torrance: What made you want to be a part of the TT, and what makes it for you?

“The TT has got a long history and it’s an iconic event. After competing in a number of road races I was attracted to the adrenaline of the Isle of Man TT. It’s also, in my opinion, one of the ultimate biking challenges – one that I just had to do.”

Mark Travers: What is the approximate cost of running your own team at the TT?

“For the Superbikes, it’s around £40k. For Supersport, it’s around £20k, and for the Superstock class, it’s about £16k to have a bike running. Obviously there are many other costs over and above that, for example, wages for support staff and technicians and a tyre bill of around £6k to consider. Overall you’re probably looking at £120k (minimum). But, the sky is the limit depending on how good you want the bike to be!”

Nigel Hughes: How far behind John McGuinness will you finish?

<Laughs> “I’d like to think I can compete with John but he is at the top of his game. His two greatest attributes he has over most other riders are his many years of experience and he is used to and comfortable with his bike and kit. But it’s not just about competing with John – there are other riders who I’m sure will be at the top this year, for example, Bruce Anstey on his Padgetts Honda.”

Chris ‘N’ Wendy Jackson: How does it feel rattling down Bray Hill on a new steed?

“Loud! It’s fantastic; the F3 is a very advanced bike with a lot of potential.”

Stephen McQueen: Are you going to embarrass the top men this year?

“I believe we’re good enough to challenge for a podium if the kit performs. Watch this space!”