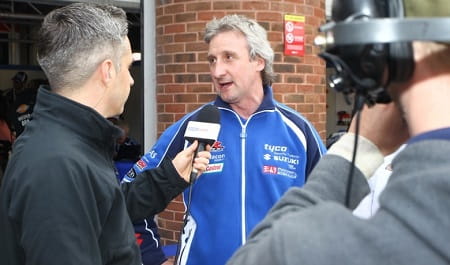 The Tyco TAS Racing team are one step closer to announcing a deal to run BMW machinery next season after team boss Phillip Neill has confirmed the Ulster-based outfit will end its long-term relationship with Suzuki.

It’s long been rumoured the team, which has worked with the Japanese marque for 14 years, would make the switch to BMW’s S1000RR next season but bosses have denied it up until now.

The team had a tough season in this year’s British Superbike Championship with John Hopkins and Josh Waters. Hopkins performed well under par, taking just three top six finishes to place some 67 points behind his Aussie team mate who, despite winning two races and achieving a string of consistent results at the end of the season, only managed 9th overall in the standings.

On the roads the team were a little more successful, with road racing hero Guy Martin taking two podiums for the outfit at the Isle of Man TT including second in the Superbike race.

“I have to be honest and say it will certainly be a challenge to change direction after such a long period of time leading the charge for Suzuki, both in British championship and also on the international road racing scene”, said Phillip Neill.

“On behalf of our team, my father Hector and I would like to personally thank Suzuki for their support over the years. Having enjoyed a long term family relationship with Suzuki, it was an absolute honour to have been given the opportunity to represent the brand.

“I have met and worked with some great people within the Suzuki organisation, many of whom will remain personal friends, which shows the level of mutual respect we have shared over the years. I’m sure we will see them in British championship and at the international road races next year, and while we will focus solely on our own success, we certainly wish them well.”

It is expected the team will confirm their BMW plans next week, signing Tommy Bridewell and Michael Laverty to ride the S1000RR in the British Superbike Championship while retaining Guy Martin and William Dunlop on the roads.

It is believed Suzuki will continue to field an official British Superbike presence, with legendary team boss Jack Valentine linked to a deal to run a pair of GSX-R1000s in the domestic championship next season.