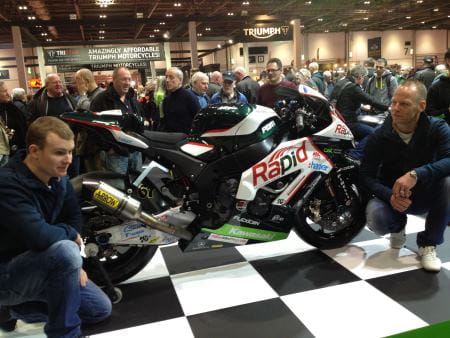 Rapid Solicitors Kawasaki has today unveiled the bikes Shane Byrne and Stuart Easton will contest the 2014 British Superbike championship aboard.

The team presentation took place on the Kawasaki stand at the London Motorcycle Show, which kicked off today and runs until Sunday.

Three-time British Superbike Champion, Shane Byrne remains with the Paul Bird team for the third year running and is joined by 2012 team-mate Stuart Easton, who returns to the team after a brief foray into the British Supersport Championship, in which he took the title.

While the title sponsor remains the same, the Kawasaki ZX10Rs see a new paint scheme for the 2014 season, with the addition of ‘British Racing Green’ features bringing the machine more in line with Bird’s MotoGP bikes.

British Superbike testing gets underway next month in Spain ahead of the season-opener at Brands Hatch in April.