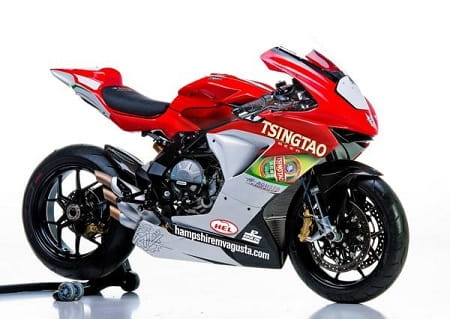 MV Agusta will return to the British Superbike Championship in 2015 with the Tsingtao Racing outfit running two rider line-ups in both Superbike and Supersport classes.

MV Agusta made their official return to racing in 2013, fielding Christian Iddon and Robbie Rolfo in the World Supersport Championship aboard the F3 which instantly proved competitive taking three podiums in its debut season. Earlier this year, Frenchman Jules Cluzel took the F3 to MV’s first world championship victory in 37 years.

"We wanted to start planning for the 2015 season at the earliest opportunity and we have been looking at the different markets and have worked in the past with MVs” said team owner, Dave Tyson. “We visited the factory and had a positive meeting with them and we have developed a new partnership which also includes converting our showroom into MV's flagship store for the UK.

"We have the bikes and we have already stripped down the F3 and have started work on it. The advantage we do have is that the MV team in Italy are sharing the information so we can work together on the development. The MV is a proven package in the World Supersport Championship and is built as a race bike so has huge potential. Nick [Morgan] will continue as our technical partner at MSS Performance and they will work closely with the factory to develop the engines.

"The Superbike we will be developing, so it is an ambitious project, but that is something that excites us. We wanted a new challenge for the future and we will be looking at riders who can be part of that and work with the team to develop the bikes. This is an exciting time for us and it should be a great new partnership. We have Tsingtao confirmed for next season so now the next stage for us is confirming our 2015 rider line-up."

Tsingtao Racing are currently leading the National Superstock 1000 championship with Danny Buchan aboard a Kawasaki ZX10R.