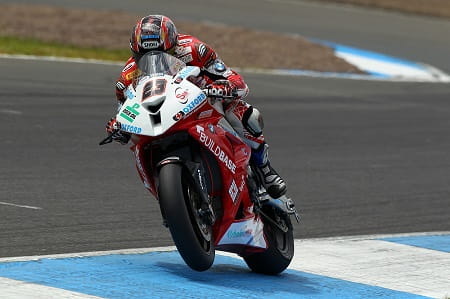 Ryuichi Kiyonari has told Bike Social that despite going three years without victory in the British Superbike Championship, he never gave up on winning. The Japanese rider took his first victory since Snetterton in 2011 at Knockhill two weeks ago and is eager to repeat the feat at Brands Hatch later this week.

The Buildbase BMW rider shot into the lead as the lights went out at the 1.3 mile Fife circuit, not looking back for the entire 30 laps to cross the line taking BMW Motorrad’s first ever victory in the British Superbike Championship.

“I’m so happy to have been on the top step at Knockhill because it’s been so long since I last won a race! “ Kiyonari told Bike Social. “For three years I’ve been trying so hard but it just didn’t work and I wasn’t winning so I’m so happy to have won again. I’m really happy for my team too as they’ve been trying really hard this season, from testing to every single session on track.” 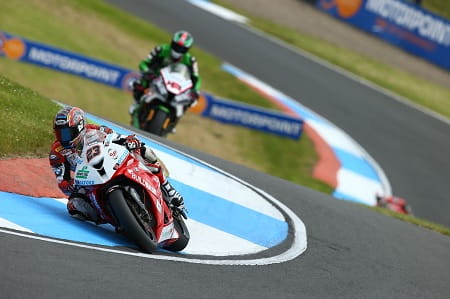 After a difficult year in 2011, Kiyonari left the British Superbike Championship to race in Asia fo 2012, where he won the All Asian Road Racing championships. Returning to British Superbikes with Honda the following year, things didn’t work out for Kiyo as he struggled to find his pace, often failing to finish inside the top ten. Kiyonari made a bold move for 2014 in switching manufacturer for the first time in his career from Honda to BMW.

“I want to win. That’s why I’m here” continued Kiyonari. “I never thought I couldn’t win, I never thought negatively. I knew it wouldn’t be easy to win again, especially with a new team and a new bike and last year knocked my confidence a lot. The BMW is good and the team have helped me a lot, so far everything has been good or me.”

It wasn’t just a flash in the pan for the Japanese racer either; he came out fighting in the second race too against a much stronger Shane ‘Shakey’ Byrne. Kiyonari took the lead into the second half of the race but a near high-side at the hairpin a lap later saw him hand the position back to his rival. Catching up towards the end of the race, Kiyo’s chances of double victory ended as he ran wide while looking for a way past Byrne.

“I was trying so hard for the double but it was my mistake. Shakey was very fast, especially in race two but I did everything I could but made a few mistakes, running wide and then nearly having a highside. It was one mistake too many and that’s why I finished second, if I hadn’t made the mistakes it could have been a win but I’m not sure as Shakey was very strong.”

The British Superbike Championship heads to Brands Hatch this weekend, a circuit that has seen Kiyonari dominant in the past.

“Brands Hatch is one of my favourite tracks so I’m looking forward to going there. I enjoy being on a motorcycle at any track but Brands Hatch is special. I want to stay at the front, I’m hoping for at least the podium if not a win this weekend but it’s not easy as BSB is such a competitive championship but I will try my best to win again.”

One of the most successful British Superbike riders in history, Kiyonari has won the same amount of titles as main rival, Shane Byrne. It might be a year late, but has the war for four finally arrived?

“I’ve no idea about the title. I’ll try! It’s a bit too early to say especially with the showdown rules. Myself and the team have to keep trying hard at each round and then maybe when we get to the showdown, if we are in it, we will see if we can win”.