Impressive podium for Skinner in Assen 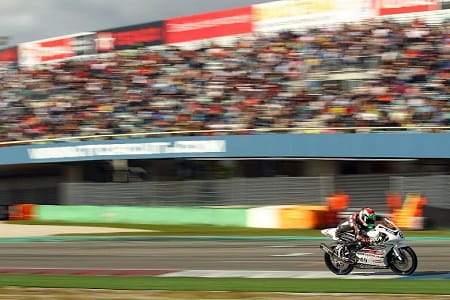 Take the fastest 12-year-old in Scotland (if not the UK), give him a bike he’s only ridden a handful of times and take him to one of the fastest race circuits in the world for the first time ever. What do you get? A podium finish if your name is Rory Skinner.

12-year-old Rory wildcarded in the hotly contested Moriwaki 250 Junior Cup this weekend at Assen and after showing promising form earlier in the year at Brands Hatch, the Scotsman only went and bagged himself a podium.

Assen, fondly dubbed ‘The Cathedral of Speed’, is not an easy circuit to learn and it took Skinner a few sessions to get up to speed. Finding over two seconds between Saturday’s two qualifying practices, the rapid youngster secured himself an impressive fourth placed grid position for Sunday’s race.

After making a steady start, Skinner was embroiled in a heavy battle for third position but once he’d forced his way through, he comfortably gapped his opponents to bring it home in third place.

“It’s brilliant to stand on the podium” said Skinner after the race. “I’ve never been to Assen before this weekend, I’ve played on the PlayStation before but it’s completely different in real life. I’m really happy to get third because I tried for the podium at Brands Hatch and just missed out but we did it here! I only thought there were two people behind me as only two got past me in the race but I managed to get them back and got my head down and tried to gap them.

“You can tell the difference between these Grand Prix circuits and the UK’s national circuits, so much more fast and flowing and quite a bit wider, really good fun to ride!”

You should probably make a note of this kid’s name; you might be seeing a lot of him in the future.