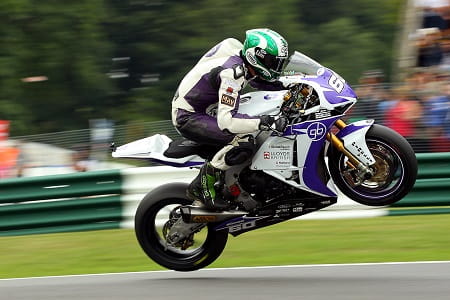 Peter Hickman has said he is still holding out for a British Superbike ride this season despite being unable to secure a ride for the opening round at Brands Hatch this weekend.

The twenty-five year old has raced full-time in British Superbikes since 2009 but could not reach a deal to join a new team for 2014. He showed promise in 2011 aboard the Tyco Honda, with a best finish of second place and ending up ninth overall at the end of the year. The Louth-based rider has struggled to replicate such form in recent years but has bagged a number of top ten finishes, including a ninth place in a one off World Superbike round with Crescent Suzuki in 2012.

Although he might not have struck a deal to be in British Superbikes yet, Hickman will still be on the racing scene this year as he makes his roads debut at the North West 200 ahead of an attack on the Isle of Man TT this June with Ice Valley BMW by Motorsave. The likeable rider hasn’t given up hope on the British Superbike front though.

“I am still holding out for a British Superbike ride as it’s where I want to be racing this year” said Hickman speaking to Bike Social.

“The roads will definitely be fun and I will be concentrating on that quite a bit but British Superbike is where it’s at and that’s where I want to be. I made an effort to get to the tests to have a look around and chat to people in order to keep my face about. You never know what will happen in the future there is always movement in the year so we’ll have to wait and see.”

Hickman also told Bike Social he’ll be present at Brands Hatch this weekend, most probably with leathers and helmet on the back seat of his car just in case.