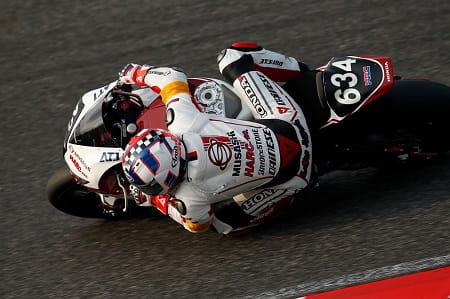 In a repeat of the podium seen just twelve months ago, Haslam, van der Mark and Takahashi were joined on the podium by the Yoshimura Suzuki team of Tsuda, Waters and de Puniet ahead of Kagayama, Schwantz and Aegerter aboard the Kagayama Suzuki.

Following heavy rain before the start of the race, a delay to the flag dropping meant  the race duration was cut to 6 hours and 55 minutes as riders set off on a very wet Suzuka circuit. The weather conditions brought drama early on, particularly for Kevin Schwantz’ Yoshimura legends squad with Suzuki MotoGP test rider Aoki crashing heavily on the sixth lap ruling the squad out of the race. 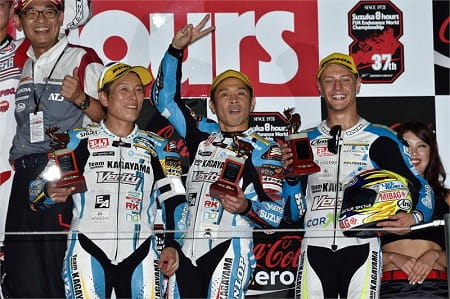 For the second year running, pre-race favourites FCC TSR Honda crashed out of a dominant lead. Kosuke Akiyoshi was the rider down and despite breaking his leg and causing significant damage to the team’s CBR1000R, the Japanese rider managed to limp the machine back to the pits enabling team mate’s Jonathan Rea and Lorenzo Zanetti to get back out after the bike was repaired. Unfortunately it was too little too late for the squad, who went on to finish in 40th position.

Josh Brookes’ Monster Energy Yamaha with YSP squad were closing in on third position before a broken quickshifter forced Broc Parkes to make an early pitstop, leaving a gap just too large to bridge before the end of the race.

TOHO Racing with Moriwaki took fifth ahead of the Honda Suzuka Racing Team. Reigning World Endurance champions SERT took eighth place ahead of GMT94 Yamaha, who take over at the top of the Endurance World Championship standings.