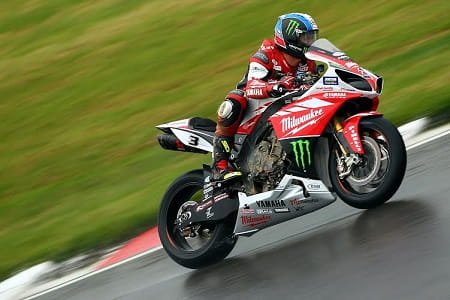 Josh Brookes has taken pole position in a sodden, incident-packed British Superbike qualifying session at Brands Hatch. After heavy rainfall throughout the day the circuit was increasingly slippery, with even less adhesive patches where riders had fallen earlier in the day.

It had looked as though Brookes wouldn’t qualify at all as he crashed out on the out lap of the first qualifying session. Fortunately the Aussie managed to push the bike across the grass and back to pit-lane to be able to get back out to set a time. The drama didn’t stop there though, as the Milwaukee Yamaha man fell yet again before the close of qualifying one. Nevertheless he set the eighth fastest time to progress to the next session. Jakub Smrz, Lee Costello, Chris Walker and Simon Andrews also fell within the first session.

The drama-packed session saw names such as Jakub Smrz, Ian Hutchinson and Lee Costello, who showed potential in this morning’s session, miss out on progressing into the second session.

With no change in condition for Qualifying 2, the drama could only continue and this time at the foot of three-time champion, Shane Byrne. The local man took his time getting out in the session after the off in Q1 and when he eventually made it on to circuit he was unable to set a time fast enough to progress to the next session.

With a few surprise names in the final shoot out including Ben Wilson and Richard Cooper the session got underway without apparent incident. Ryuichi Kiyonari set a time over one second faster than anyone else on track before crashing out the following lap. It had looked as though the Japanese man could retain pole position until Josh Brookes stormed to the top of the timesheets over seven tenths faster than Kiyonari on the BMW. Unaware he’d taken the pole, Brookes continued to push only to crash a third time before the chequered flag. John Hopkins also went down after setting his fastest time of the session, which was good enough to complete the front row.

“My switch to Yamaha has gone so well, it’s been everything I hoped it would be” Brookes said after taking pole position.

“The bike works great, I’m fast in the dry and this morning was our first session in the wet and after a bit of work we started to find some real strong grip, I could even get my knee down! When we went out in qualifying it was like a completely different circuit. It was lethal. I was coming out of the final turn with half the throttle and lean angle than I usually would and I fell off.

“I managed to get up and I initially thought it was game over but then I realised there was plenty of time so I tried to get it back to the pits as it was absolutely fine but the marshals said no. I didn’t want to ride it I just wanted to get it back to the pits to get it cleared so I could get back out. They eventually let me back and I said to the guys in the garage that we needed to put a fresh rear tyre in as I thought a bad tyre had caused the crash.

“We went out on a new tyre and I crashed again and then I really started to doubt the rest of the session but again I got it back to the garage and the team did a fantastic job as the seat unit was busted and the faring was hanging off. They fixed what needed to be fixed and I got back out into the second qualifying session.

“From there on I was just trying to survive, as much as I wanted to set fast lap times every lap was heart in your mouth but yeah I managed to get pole and I’m thrilled! That’s three crashes to the bike now and I landed on my head in one so I’ve wrecked a helmet and the team have got to work hard to repair it for tomorrow so at least I’ve got this result to make up for it.”

Chris Walker heads up the second row ahead of James Westmoreland and Richard Cooper, with Ben Wilson, Michael Rutter and Keith Farmer on the third.