Byrne wins as Kiyonari closes in at Assen 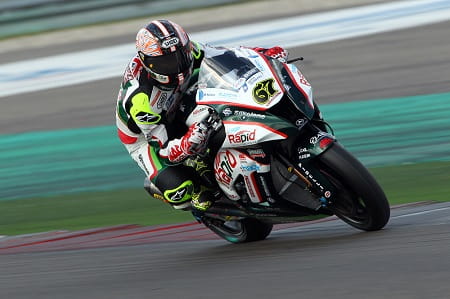 Dan Linfoot re-took second place into the fourth lap as Byrne charged ahead to build a gap of almost a second. Josh Waters made progress on lap five as he moved into fourth position before stealing third from the Bimota.

Iddon, Kiyonari and FFX Yamaha’s Filip Backlund were scrapping it out for fourth as Linfoot closed down Byrne’s gap.

Full intermediate tyres proved the wrong choice for Chris Walker, John Hopkins, Jon Kirkham and James Westmoreland who languished at the back of the grid, it went from bad for worse for the gamblers as the rain started to come down heavy on lap ten.

Jon Kirkham and Joe Burns crashed out as Josh Waters and Filip Backlund took advantage of the downpour to latch onto the back of Byrne with Kiyonari not far behind in fourth. Backlund slipped back with a huge moment out of the Gert Timmer chicane as Waters hit the front on lap eleven.

Having hit the front, Waters instantly gapped his rivals as the war for four ensued between Byrne and Kiyonari battling for second. Filip Backlund crashed unhurt out of an impressive fourth position on the 12th lap.

Kiyonari made it clear of Byrne on lap fourteen to look at chasing down runway Wildman Waters. Shane Byrne threw the championship wide open crashing out on lap sixteen. Kiyonari shot into the lead on the final lap but Waters was stronger coming into the wet part of the track, maintaining the lead across the line ahead of Kiyonari with Stuart Easton taking third.

James Ellison took a strong fourth position ahead of Iddon, Linfoot and Metcher with Mainwaring and Bridewell rounding out the top ten. 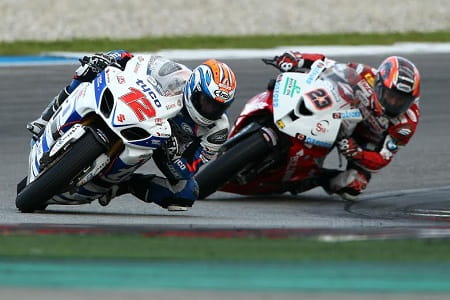 A rapid start for John Hopkins saw him shoot into the lead of race two, ahead of James Westmoreland and Ryuichi Kiyonari. Stuart Easton made a strong start to take third position by the end of the first lap as a huge crash wiped out Walker, Hickman and Muff.

Kiyonari slipped under Hopkins into the gert timmer chicane to take the lead into lap two with. Keen to make amends for his first race crash, Byrne displaced his team mate on lap three before shooting straight past Hopkins for second.

Josh Brookes' championship chances took a huge dent when the Aussie fell down the pack after lap four seemingly struggling with technical problems with his Milwaukee Yamaha.

Knowing his points lead had diminished, Byrne put the pressure on the Buildbase BMW looking for a gap as soon as he closed the gap. Christian Iddon crashed out of seventh place on the fifth lap.

It closed up at the front around mid-sdistance with a five way pack forming between Kiyonari, Byrne, Hopkins, Bridewell and Linfoot. Jon Kirkham crashed out of ninth place on the Halsall Biker Gear Kawasaki on lap 10 as Josh Brookes finally retired from the race. Tommy Bridewell took third from John Hopkins as Byrne continued to shadow the race leader keeping the pressure on. Hopkins also lost out to Dan Linfoot the following lap dropping off the pack.

Byrne was strong into the chicane each lap but Kiyonari's defensive riding held him off on the the penultimate lap but couldn't keep him off on the final lap as the Rapid Solicitor's Kawasaki flicked around the BMW to take victory. Tommy Bridewell completed the podium ahead of Dan Linfoot and John Hopkins.