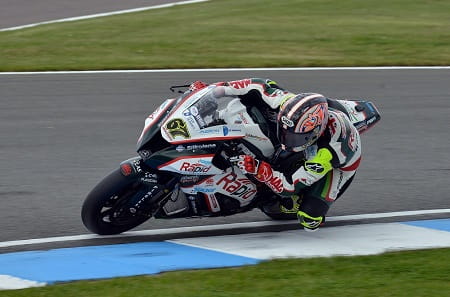 After missing out on victory for the fifth consecutive round, Shane Byrne has admitted that he’s sick of finishing in second place.

Despite a dominant start to the season, the three-time British Superbike Champion has finished second in six of the last eight races and hasn’t stood on the top step since Knockhill. Faced with losing out to Ryuichi Kiyonari again at Donington Park this weekend, Byrne says he pushed 150% in both races as he’d rather have crashed than finished second.

The Kawasaki rider leads the championship into the final three round ‘showdown’ phase but isn’t all too happy to have had his 100 point lead to just 26 points with seven races remaining. He’s chased in the standings by Josh Brookes and Ryuichi Kiyonari, who are separated by just a point.

“I got a decent start in the second race and nearly got past Kiyo but couldn’t quite make it, so I sat up and lost another place to Stuart!” said Byrne. “I thought ‘oh dear this can’t stay like this or he’ll get away’ so I got onto the back of him but he was setting such an incredible pace, some laps he’d be dropping down into the 1’29s and I’d be thinking “Jesus!”. I formulated a little cunning plan which backfired on me, I wanted to pass him into the Old Hairpin so got a lot of drive out of Redgate to carry momentum out of Craners but I sent myself to the moon, I was lucky to stay on! I rode 150% for the rest of that lap and did get close but nowhere close enough for a lunge.

“I’d have rather crashed than finished second again, no disrespect to Kiyo but I’ve had so many second place finishes recently I’m sick of them. Wins in this class don’t come easy and we did everything we could to win the races today. It’s onwards and upwards for the showdown now, on a positive note, I finished in front of Josh twice which is important but I’m a bit downhearted as the showdown means I go from a 100 point lead to a 26 point lead! That’s the format of the championship though so now it’s time to up our game. It’s not going to be easy but I’m going to work as hard as I can and do everything in my power to win some races.”