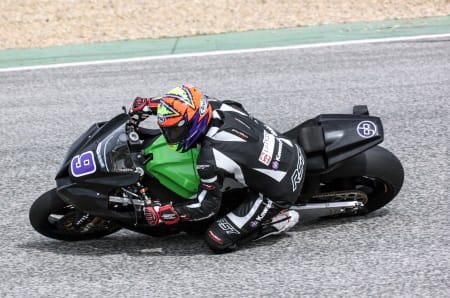 The first official British Superbike test of the 2014 season gets underway today at the Almeria circuit in south eastern Spain. Only a few teams are present, with some having already tested in Spain at the start of the month and others opting for more cost-effective testing programmes making use of the fairly decent weather so far this spring.

Three time British Superbike champion and most successful BSB rider ever, Shane Byrne makes his first outing of 2014 at the test with teammate, Stuart Easton. Remaining with the same team for the third consecutive season, Byrne can focus on ‘more of the same’ during testing being the only top rider not to be riding for a new manufacturer.

With Tyco Suzuki, Milwaukee Yamaha and Millsport Ducati having already tested earlier this month, Almeria is very much a Kawasaki affair with the Quattro Plant and GBmoto Kawasaki squads present alongside Paul Bird’s outfit. GBmoto riders, James Ellison and Chris Walker come fresh from a weekend shakedown at Cartagena, where Ellison made his Kawasaki debut with the team. Also taking a first ride out on the ZX10R is Wetherby lad, Dan Linfoot riding for Pete Exstance’s Quattro Plant squad. He’s joined by teammate Howie Mainwaring, who had a couple of decent results on the ZX10R last year.

Brazilian, Rhalf Lo Turco is making his on-track BSB debut at the test, the Brazilian rider stepping up to the elite class this year again on Kawasaki machinery. Lo Turco will become the first Brazilian to race in BSB come Brands Hatch on Easter Monday.

Riders BMW is also present with Martin Jessopp, the Yeovil-based rider taking full advantage of Spanish testing this year having being present at the Cartagena test at the start of the month.

The three day test runs until Thursday, when teams will return to Britain for the first official test on UK soil at Donington Park on April 1.