Ryuichi Kiyonari and Josh Brookes ate into Shane Byrne’s championship lead in this weekend’s triple header British Superbike round at Oulton Park with Kiyonari climbing onto the top step in the first two outings before Brookes stormed to a dominant victory in the third.

Despite poor weather forecast for Saturday afternoon, the sun was shining in Cheshire ahead of Saturday’s first race and it was Shane 'Shakey' Byrne who took the holeshot from pole position ahead of Josh Brookes and BSB veteran Chris Walker.

After qualifying on the front row for the second successive round, Dan Linfoot shot past Walker into Cascades followed by Milwaukee Yamaha’s Tommy Bridewell.

A strong start from the fourth row of the grid saw Ryuichi Kiyonari join the battle for the lead by lap four, barging his way through into third place. The Buildbase BMW rider passed Byrne for second on the ninth lap, immediately pulling a gap to chase down race leader Josh Brookes.

It was just a lap later that he took the lead from the Aussie before looking to pull a gap. Despite setting the fastest lap of the race chasing Kiyonari down in the closing stages, Brookes had no answer for the BMW and was forced to settle for second.

Tommy Bridewell crossed the line fourth ahead of Dan Linfoot with John Hopkins securing one of his best results of the season in sixth position. Peter Hickman took seventh on the RAF Reserves Honda with Josh Waters, Stuart Easton and Howie Mainwaring rounding out the top ten. 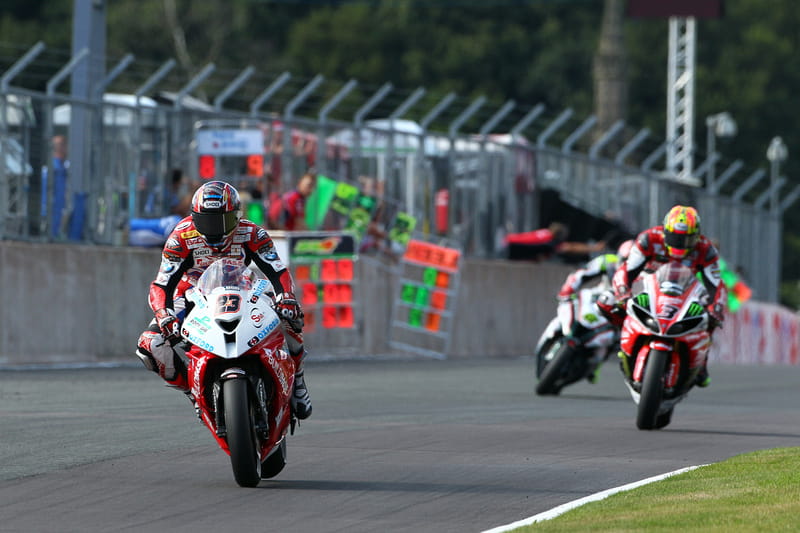 With what was apparently the backwash of hurricane Bertha lashing the circuit with rain on Sunday morning, questions arose in regards to whether the race would go ahead. Forutnately the rain had slowed by lunchtime and the Ducati Cup race forged a dry line on the circuit, leaving BSB riders with the difficult decision of whether to use slick or intermediate tyres.

After much ‘umming’ and ‘ahhing’ the popular choice seemed to be full slicks. Starting from pole position, Josh Brookes took the holeshot ahead of Kiyonari, Byrne and John Hopkins.

Hopkins, the only rider from the first two rows on full intermediate tyres, didn't capitalise from his good good start. The American ran on at the chicane on the second lap before retiring from the race just two laps later. RAF Reserves Honda man Peter Hickman fell from ninth place on on lap five.

First race winner Ryuichi Kiyonari stole the lead from Aussie Brookes into the ninth lap and despite his best efforts to pull a gap, Brookes remained firmly on the back of the BMW. Drifting away in third place, Byrne upped the pace towards the end of the race to chase down the leading duo but struggled to get close enough to mount a challenge. Brookes looked to be planning a move on Kiyonari into Lodge on the final lap but with the dry line only so wide, he opted to play it safe bringing it home in second place.

The bigger battle of the race was for fourth position between no fewer than five riders; Chris Walker held the position into the final lap but was mugged by Dan Linfoot in the final corner. Jon Kirkham finished eighth on the Halsall Biker Gear Kawasaki. 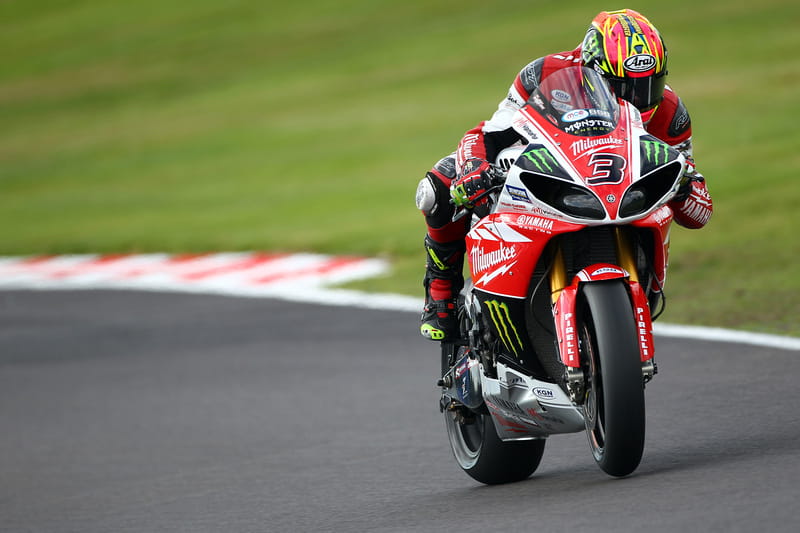 Track conditions were tricky once again following a downpour after the second race and with dark clouds ahead, riders were hanging off pit wall ahead of the start in order to decide which tyres they'd run.

Most riders set off on slicks hoping the clouds ahead would pass by. Shooting off the line like a rocket, Josh Brookes vaulted into the lead ahead of Byrne, Easton and Kiyonari as the pack leaned into Old Hall Bend for the first time.

Eager not to finish second for the third time this weekend, Brookes bolted on the first lap building a lead of almost a second. Having made a poor start from the front row, Ryuichi Kiyonari hung on to the back of Stuart Easton in third position with Chris Walker and Dan Linfoot behind.

By mid-race distance Brookes had stretched a lead of almost four seconds. Kiyonari finally got past Easton for third into Lodge on lap nine but the BMW man got it all wrong going into Old Hall, seeing Easton back past along with Quattro Kawasaki’s Dan Linfoot.

Easton was displaced for third by Dan Linfoot on the tenth lap with the Wetherby man then reeling in second placed Shane Byrne. He made his move at Old Hall Bend on the 15th lap but a fighting Byrne soon regained the position. Brookes eventually crossed the line over six seconds ahead of Byrne with Linfoot denying a late race surge from Ryuichi Kiyonari to take his debut British Superbike podium.