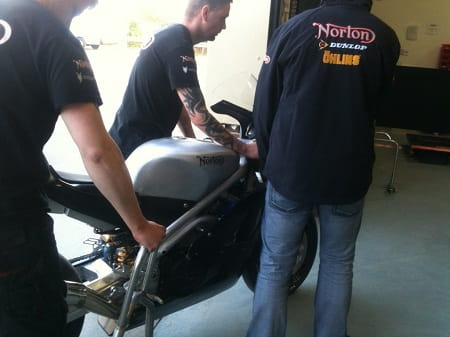 This is the first picture of Norton’s all-new 2013 Isle of Man TT racer that will compete in the Senior TT this year – the Norton SG2.

The bike was out on a shakedown test last night, and the picture was sent to Bike Social by a factory insider as it was wheeled back into Norton's Donington Park factory.

Close inspections shows the bike appears to be all-new compared to the SG-1 that was run at the Isle of Man as a factory Norton prototype last year.

Sadly our man only managed to get one picture as he reached for his mobile phone before the bike was put away, and told us he was obviously keen not to get caught.

Sources inside the factory say the bike has an all-new frame produced in-house, using the expertise gained from Norton buying frame builders Spondon.

The frame uses fully adjustable geometry and has a longer wheelbase than last year’s SG-1, to improve stability and also allow the team maximum adjustment. Rather than an evolution of last year’s TT bike, it appears to be an all-new bike with a massive tubular frame. This kind of chassis set-up should also provide some longevity for the prototype and if successful means Norton can keep this bike for a number of years.

We know from a picture released from the factory earlier that the new race bike also has semi-active suspension which allows the bike to be set-up for different parts of the course.

Our sources say Norton’s TT riders, Dan Hegarty and Ian Mackman, will be able to switch suspension settings for different parts of the TT course. That means they can run a hard or soft suspension set-up depending on which section of the course they are on and switch between different settings on the fly.

The firm is also known to be planning a limited-edition road bike based on the TT race bike, but with a 1200cc motor, instead of the RSV4’s 1000cc V4 lump.

Looking closely at the pictures, the bike appears to have all-new bodywork, and is believed to be using a much larger frontal area to keep the riders enclosed around the high-speed and punishing TT circuit. The bike was deemed too narrow last year for the high-speed circuit.

Although we can't see the brakes in this shot, a website called BikeHPS.com confirms that the Norton TT bike will use six-piston calipers from Swedish company ISR, a specialist brake company from Sweden. The website states that Norton are using 320mm fully-floating discs, with 130mm six-piston radial monoblock calipers.

The bike will make its TT debut in practice week which starts on Monday May 27. Rider Ian Mackman was the first rider to qualify a Norton for the TT in twenty years last year, but sadly it never got to race because adverse weather conditions meant the Senior TT was cancelled.

Mackman and Hegarty will also make their Isle of Man Classic TT debuts on Manx Nortons, as previously reported on Bike Social.