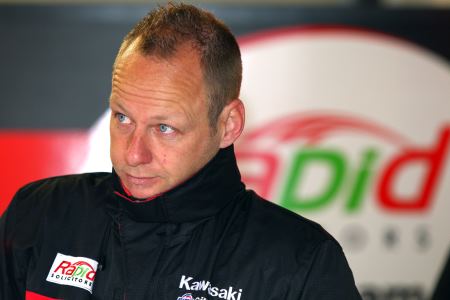 Where Shane Byrne will ride in 2014 has been subject to much debate over recent weeks. Paul Bird suggested he’d done a deal with the three-time champion back in October for Byrne to then deny that he’d signed anything. Today Paul Bird confirmed the 2003, 2008 and 2012 British Superbike champion would line up in his BSB outfit for the third year running.

With hot rumours that Honda UK were looking to secure him for 2014, the most successful BSB rider has been the subject of much discussion. As we reported the other day, Byrne recently attended a test with the team in Cartegena strongly suggesting he’d be returning with Kawasaki power for 2014.

After the loss of title sponsor Samsung, rumour had it the Louth-based Honda squad would be pulling out of the series should they be unable to sign a big named rider such as Byrne. This news brings yet more uncertainty for Havier Beltran’s outfit and our sources suggest a decision on not running in 2014 may have already been reached.

"Paul and I agreed a deal ages back and I'm made up I'll be racing for the PBM Rapid Solicitors Kawasaki team once again in 2014" explained Byrne.

"We came so close to defending our title that it makes us even more determined to win it back this season and I know I've got the most competitive package to do that. We had a successful test in Spain earlier this week so I'm feeling confident already."