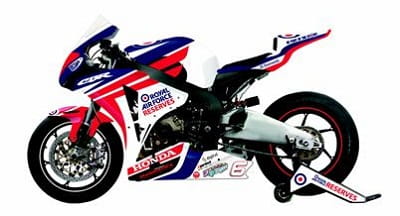 There’s enough pressure on the shoulders of racers to win races, let alone carry a recruitment campaign for the RAF Reserves at the same time!

As well as riding for the Honda TT Legends team in World Endurance, Andrews will aim to win the British Superstock title on the RAF Honda CBR1000RR.

Simon Andrews said: “The project appealed to me from the outset and I was very interested to be a part of it, being the rider who carries the responsibility of a recruiting campaign is pretty exciting. I am looking forward to working with the RAF Reserves race team this season and it will provide me with an excellent opportunity to keep sharp throughout the season, in between racing duties with the Honda TT Legends and the road racing calendar."

He added: "The Superstock 1000 Championship is very competitive but I have my sights set on winning it! After initial meetings with the team I could see that they were very professional and driven towards achieving success and that’s something I share. I think together we will make a good team, who knows, they may even get me signing up to the RAF Reserves at this rate, keep me sharp in the off-season!.”

The team will be managed by Lee Hardy, an employee of the Forward Engineering Support Squadron at RAF Marham, a former racer himself and Team Manager for the last two years, and the team will get technical support from Honda Racing’s Samsung Honda team.