Sibling rivalry for the Lowes brothers 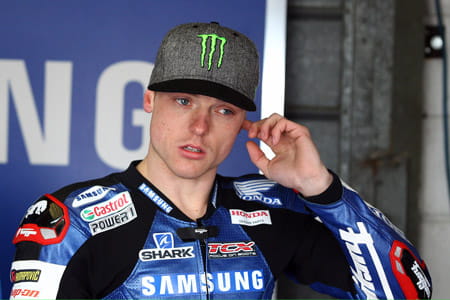 These are heady times for the Lowes twins.  The Lincolnshire lads are riding high and gunning for two major championships – Sam is topping the chase for the World Supersport crown while Alex has nosed in front of the vastly experienced Shane Byrne in the scrap for the British Superbike crown.

The secret of their rapid rise to prominence is their enthusiasm and dedication, not forgetting the usual friendly, but intense brotherly rivalry that has been clear from the very early days of their schoolboy motocross right through to the present.  As Alex put it after winning his first BSB race of the season at Oulton Park: “I had to do something, Sam won last week and I can’t have him putting one over me!”

But there is much more to it than that. They train hard and are single minded as they go about their careers.  They were riding and winning as eight-year-olds in motocross and as soon as they were old enough to take to road racing, they were cutting their racing teeth in Cagiva 80cc Junior action and then taking the step, as 12-year-olds, into Aprilia Superteens, the launch pad of so many to riders among them no less a figure that World MotoGP Champion Casey Stoner.

Ambitious for progression, clubbie 125GP racing, then British Championships and for Alex the occasional sortie into the German series, but for both, it was always a case of looking forwards and upwards with the competitive British Supersport series their next challenge. Sam entering the fray as soon as he reached the minimum age of 16 years to qualify, Alex the following year.

Sam moved into European Superstock 600 action, Alex soon followed, experience building action, new challenges and for Alex the chance to ride MV in the European 1000 Superstocks while Sam reverted to British Supersport winning the crown in 2010.  That earned him graduation onto the World stage and the Supersport Championship in which he is now a leading player.  Sam was establishing himself while Alex was having to battle a difficult time, switching between Supersport and British Superbikes before settling, or so it seemed. It was character building experience and he came through it all the stronger.

Alex was riding in the BSB-EVO class at the start of 2011 for WFR Honda, winning five of the first six races before leaving them by mutual consent and riding for several teams in BSB and Supersport before rejoining that team for a full blown assault on the main BSB crown in 2012, making the showdown sequence and proving himself as a title contender.  He has continued that form in the opening three rounds of this season, finishing in the top three in each of the six rounds, to lead the way by a single point.

And, Sam, not to be outdone, has just completed a hat-trick of victories to move 30 points clear of the three-time World Supersport Champion Kenan Sofuoglu.

Yes, the twins mean business. Fiercely single minded, competitive and dedicated they prove that British riders can battle for honours at the top level.  And, their next goal.  Both to graduate into World Superbikes next season, and then the battle begins for real in the Lowes household.