Kiyonari out for Silverstone? 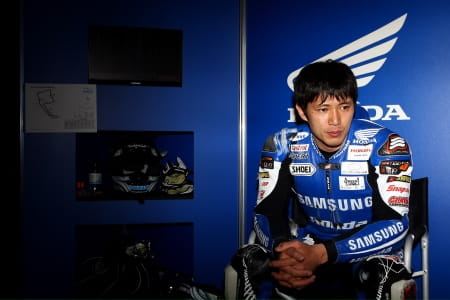 With a thirty-seven point deficit to championship leader Shane Byrne, Samsung Honda’s Ryuichi Kiyonari's chances of clinching a fourth BSB title were always going to be somewhat unrealistic ahead of the second round of the showdown at Silverstone this weekend. Now the three-time champion’s chances are pretty much scrapped, as he won’t be there.

Word from the paddock is that Kiyonari injured himself in a motocross accident on Tuesday and will not ride this weekend at Silverstone.  It would seem he’ll be replaced on the Samsung Honda by twice World Endurance champion Freddy Foray.

Foray briefly ventured into the world of British Superbikes in 2012 with PR Racing Kawasaki. After a tough first half of the season, Forary decided to up sticks and left the team and hasn’t ridden in the British series since. For 2013, Foray has been riding a Honda in the German Superbike championship.

2013 has not gone to plan for Kiyonari, who returned to Britain to challenge Shane Byrne to become the first rider to win more than three titles. Four third place finishes helped the Japanese rider clinch a spot in the showdown.