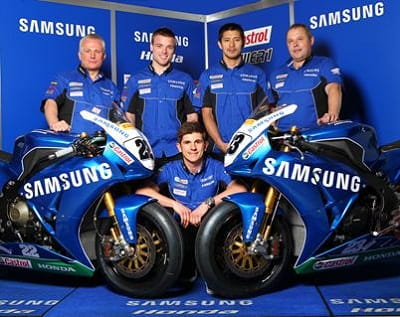 Three-times BSB champ Ryuichi Kiyonari is back with the Honda BSB team in 2013!

Kiyonari will make a comeback with the team which took him to the title in 2006, 2007 and 2010, now flying under the Samsung Honda banner. Like current Champion Shakey Byrne, he will be looking to add a record fourth BSB title to his crown.

As predicted by Bike Social, the old-stager is joined by Alex Lowes in the Samsung Honda squad on-board Honda CBR1000RR Fireblades.

Team Manager, Havier Beltran said: “We are very happy to announce what we think is a supremely strong rider line-up in both Superbike and Supersport. With Kiyo returning we know we have a rider who is a proven winner and we hope to get the best out of him once again. Alex Lowes is a young, exciting rider on so many levels and has the potential to become one of the greats.”

Lowes is still very much learning to ride a superbike but that didn’t stop him taking four podiums and a double race win at Silverstone, with arguably the move of the season to take victory in the second Superbike race of the day.

Ryuichi Kiyonari said: “I am so happy to be returning to this team and to this championship. I have had great success in this series and am keen to repeat this once again. I really love the British fans and feel at home here. They love their racing in the UK and really get behind the riders. I have been away for a year and have had time to think about a lot of things. I kept coming back to the idea that I wanted to race in the UK again and am really fired up for the challenge and about the prospect of a fourth title.”