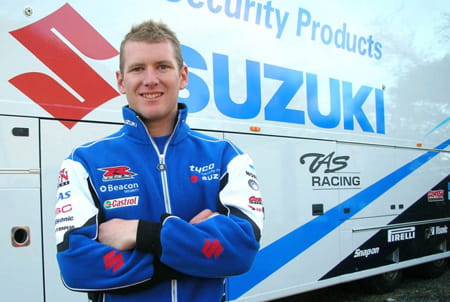 Earlier today, Tyco Suzuki made a statement in which Team Manager, Philip Neill thanked the team's 2013 riders, Josh Brookes and PJ Jacobsen who shall be moving on to pastures new. Brookes is expected to join the Milwaukee Yamaha team while Jacobsen is reportedly making a move to World Supersport for 2014.

A week ago, Tyco announced John Hopkins would return to British Superbike with the Northern Irish outfit after a one-year sabbatical from racing in order to recover from numerous injuries.

Before switching to Yamaha for his BSB debut in 2013, Waters had ridden for Suzuki for seven years, taking two Australian Superbike titles and showing strong form at the Suzuka 8 hour with Yoshimura Suzuki.

“I am really happy and excited to be joining Tyco Suzuki for the 2014 season” said Waters. “I’ve spent a lot of years racing with Suzuki in the past, and every year I was with them, they were very successful for me.

“TAS Suzuki is a team I’ve followed for a long time, and it goes without saying, Hector and Philip Neill run a great team. I’m currently back home in Australia, but I can’t wait to start testing the GSX-R1000 Superbike for the 2014 season. I’m looking forward to it already and partnering John Hopkins in the Tyco Suzuki set-up is an added bonus.”