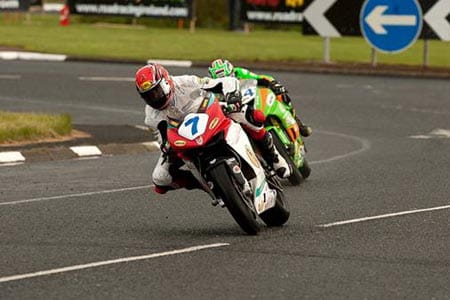 Earlier this year, Jack Valentine announced that he’d be returning his attention back to road racing and spearheading the Valmoto MV Agusta team at the 2013 North West 200 and Isle of Man TT road races. Although most recently managing the Crescent Suzuki team in the World Superbike Championship, the highly experienced race team manager is no stranger to the roads having masterminded victories for David Jefferies and Bruce Anstey at the TT in the past.

The new Valmoto MV Agusta team, which includes Supersport contender Gary Johnson aboard the Metzeler-shod MV Agusta F3 675, made its debut on the roads this week at the prestigious North West 200 races, but it wasn’t all smooth sailing…

Despite very little pre-NW200 testing time, including a day at the Mallory Park race circuit, the week in Northern Ireland started relatively positively. “Our primary focus for Tuesday’s practice session was just about making sure we had a good set-up, rather than fast lap times,” explains Jack. “Gary [Johnson] completed four laps during the session and we were feeling really positive about the F3’s performance, especially since we only had the bike running once before we arrived.

“The strong winds led to some stability problems with the bike, particularly at high speeds, but we were confident we could make some improvements to the chassis so we could really take advantage of the course’s two long straights. Gary was generally pleased with the bike too.”

Having ironed out some of the teething problems and made further progress with the F3’s set-up, the team went into the first Supersport race on Thursday (16 May) with renewed enthusiasm. However, they were dealt a cruel blow when Gary was forced to retire from contention after the tip-off switch – designed to cut the engine in the event of a crash – malfunctioned when he was flat out on the run down to Metropole in sixth gear, and running in sixth place.

“We had been having such a positive week and the bike had been developing in leaps and bounds,” continues Jack “We’d found a great set-up and the conditions were in our favour because Gary had been riding so well in the wet. We were extremely frustrated that such a small part can change a possible good outcome. We were all a bit deflated after the race, but after sleeping on it, we were of course looking ahead to the second race.”

Today’s Supersport race began under treacherous conditions, including heavy rain leading to standing water on the road. The race was red-flagged at 11.30am – just 15 minutes after it started – and an hour later, there was still no sign of it restarting. With heavy rain forecast to continue in Northern Ireland until 8pm, and conditions not looking likely to even slightly improve, the Supersport race result was declared – with Michael Dunlop taking the victory – and the rest of the NW200 races were abandoned. It was surely a disappointing finish to the week for the Valmoto MV Agusta team.

“What can I say, we can’t control the weather!” continues Jack. “It’s frustrating for us, the organisers and the fans that the races have to be cancelled – we’ve been in Northern Ireland for the best part of a week preparing for today’s event and we’re unable to get a fair shot at it. However, that being the case, it’s not unlike some of the weather conditions we’ve experienced in the British Superbikes, for example.

“Although we haven’t been able to complete a full race with the F3, we are pleased with the development progress we’ve made over here. We posted some good times through the speed trap and we’ve managed to fix the problems we had with instability earlier on in the week. Overall, it’s been a bit of a learning curve for us.”

The team now only has a short respite before it travels to the Isle of Man for the infamous TT races, which start in two weeks’ time. However, Jack is certain he’ll have some time in the workshop first. “We’re looking forward to getting back into the workshop next week and analysing the data we’ve collated while over here,” he explains. “Gary [Johnson] thinks we’re 98% there with the bike now – which is fantastic. We just needed a bit more time on the roads to really get some testing time in…”