Francis falls on the final lap at Brands Hatch 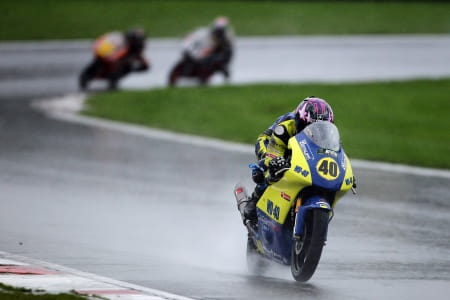 Having won the British Motostar Championship at the previous round, Joe Francis had said he wanted to enjoy the final round at Brands Hatch. Unfortunately the weather made things a little more difficult. Joe fought on and by the last lap had built himself a comfortable lead, however the tricky conditions caught him out. We caught up with him to discuss the final race of the season:

“I don’t mind riding in the wet, we all have to do it so you just have to get on with it but obviously I’d prefer it to be dry. I woke up in the morning and saw it was wet and knew what we had to do.”

“We didn’t go out in the first session as the team didn’t want to but we went out in the second which was dry and ended up fifth, just getting back into it really. In qualifying the conditions were the same as Friday morning which was quite frustrating as we could have had a session to get up to speed on Friday. I was eleventh until the last lap and then I managed to get up to fourth as I got used to the condition. It was soaking wet for the second session and I went out as I knew the next day it would be worse! We had another good session and ended up fourth.

“For the race, I was feeling confident as it was the last race and we could just have fun as we’d already won the title. The rain was so bad, the conditions were changing every lap. I felt comfortable at the front and was enjoying it and had a good gap going into the last lap and one minute I was riding normal and the next minute I was on my bum! I hadn’t had a moment all race and then the first moment I had I crashed but it didn’t really matter as we’d already wrapped up the championship.”

“The plan is to go to Spain next year but we’ll have to wait and see if anything comes together. “

“I’d like to thank Bennetts, WD40, Newts Oil, Shark Helmets, Watches of Distinction and Roger Marshall for all their help this season.”