Could you be Triumph's new Young Gun? 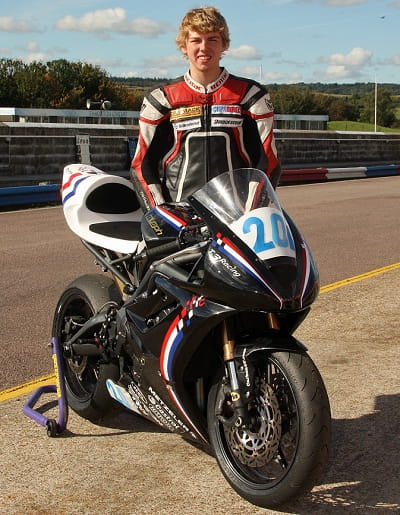 Triumph has kicked off its Triumph Young Guns scheme for 2013 and if you enter you could get the chance to win a factory-supported ride and coaching from some of the most experienced names in UK bike racing.

Triumph Young Guns was established to help young road race stars between 15 and 20 and help them become the stars of tomorrow.

Ten riders will be selected as finalists and as well as one of them winning a ride in the Triumph Triple Challenge in 2014, all ten riders will also get tailored training sessions throughout the year, delivered by a series of industry experts, focusing on issues such as personal fitness, racecraft, bike set-up/development and marketing/promotion.

Following these sessions, the ten riders will be assessed by a panel of judges including a professional rider, race team manager, British Superbike management and senior figures from Triumph, to whittle the field down to the three Young Guns finalists.  The finalists will then go head-to-head on the track, with the overall winner of Triumph Young Guns 2013 announced in October.

Guy Masters, general manager of Triumph UK, said: “We’re really excited about the third year of the Triumph Young Guns. Last year’s scheme had a very strong field of riders and I am sure that 2013 will be no different.

“The Young Guns competition is designed to find and nurture the next wave of racing stars and our 2011 winner, Chrissy Rouse, performed well last year in the Triple Challenge finishing third overall in his first year in the championship. Last year’s Young Gun’s winner, Tom Oliver will be looking to stamp his own mark and progress his racing career in this year’s Triumph Triple Challenge.”

MCE BSB promoters MSVR will also be supporting Triumph Young Guns and providing a member of the judging panel. Stuart Higgs, MCE BSB series director, said: “Young Guns is an ideal opportunity for aspiring riders to develop the range of skills they will need at higher levels of racing. Achieving great lap times is one thing, but this scheme is really designed to give riders a much more rounded set of skills that will help them both off and on the track.”

The deadline for entries to Triumph Young Guns is Monday 19th April, 2013. Application forms can be obtained via the Triumph website.