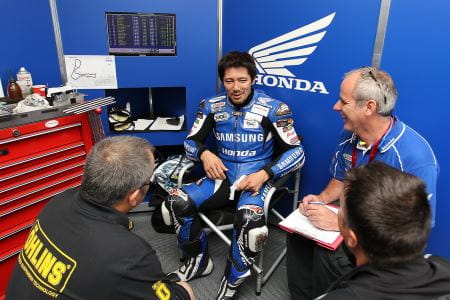 Honda UK has announced they will not be on the British Superbike grid in 2014 after being unable to sign a big named rider, as predicted by Bike Social recently.

Last month we reported the 2013 British Superbike Champions had been unable to reach a deal with Samsung for 2014 after the departure of wonder-kid Alex Lowes. The Louth-based team had reportedly been trying to tempt three-time champion Shane Byrne away from Paul Bird’s squad, however the Cumbrian outfit confirmed Byrne would be staying put last night, fuelling reports Honda would pull out of BSB.

Confirmation came as the outfit announced their withdrawal on local television and radio channels, stating financial reasons and the lack of available big-named riders. Honda has won four titles in their ten years in the British Superbike series, including this year’s title with Alex Lowes who is heading to Crescent Suzuki in World Superbikes for 2014.

The Lincolnshire outfit suggest they’ll be looking to get back on the grid for 2015.