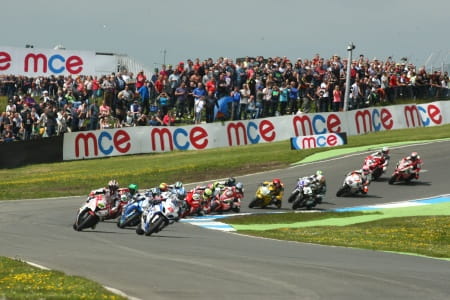 Shane Byrne continued his domination of the 2013 British Superbike championship at Knockhill this weekend, taking pole position and both race wins despite Josh Brookes’ best efforts to stop the Kent man.

Byrne’s participation came into doubt when his wife was rushed into hospital on Friday with post-surgery complications; however the three-time champion decided to stay in Scotland and put on a stunning display. Worries about his wife did not impede his speed; his pole position on Saturday was the fastest ever two-wheeled lap of Knockhill.

Josh Brookes took the lead from the line in the first 30-lap race and maintained the top spot until three laps to the end when Byrne, who had been shadowing the Australian throughout the race, made a move and pulled a gap large enough to ensure the win was out of Brookes’ reach. Championship leader Alex Lowes made his first mistake of the season as he fell at the hairpin mid-race, allowing team-mate Ryuichi Kiyonari to have a hassle-free run to his first podium of the year. The Kawasakis of Keith Farmer and Chris Walker completed the top five.

In the second race, Byrne took the lead early and controlled from the front. Brookes, determined not to see another win slip away, put in a series of fast laps towards the end which saw him take the fastest lap of the race with one lap to go.  However it wasn’t quite enough to catch Byrne, who cruised to his sixth win of the season. Kiyonari completed the podium again, marking a significant improvement for the Japanese rider, whose future in BSB had been in doubt after finishing in the top ten only once this season. Lowes finished behind team-mate Kiyonari for the first time this season in fourth while Chris Walker again completed the top five.