Byrne still in command ahead of Oulton triple header 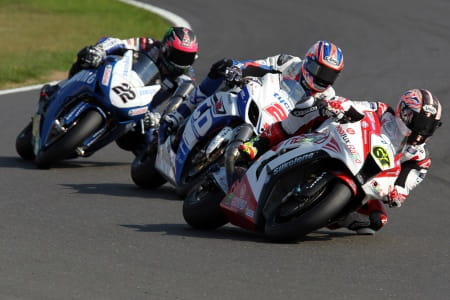 After a short break, British Superbikes return this weekend for their second visit of the year to Oulton Park. With three races scheduled, riders will be looking to capitalise as they head into the final three rounds before the title showdown.

Having dominated the season thus far, taking eight victories and being on the podium in every race with the exception of two crashes, Shane ‘Shakey’ Byrne is looking to bag a monumental fiftieth BSB win in one of the weekend’s races, and mathematically stands a chance of being the first rider to qualify for the title showdown. When the series visited Oulton earlier in the year, Byrne fell out of contention for the win in the first race and took victory in the second and as this year has shown, you’d need to be a very brave man to bet against the three-time British champion to take victory this weekend.

Sitting just twenty-one points behind Byrne in the title chase, Alex Lowes will be looking to replicate his form from the earlier visit to Oulton, where the Lincolnshire youngster took pole position and the first race victory.

Josh Brookes took his first victory of the season last time out at Brands Hatch and since then he has taken a second place finish at the Suzuka 8hr. Brookes is just twenty-two points behind Byrne in the championship and when the showdown rules are taken into consideration the gap reduces to ten. The Australian took two podium finishes last time out at Oulton, but he’ll be hoping to go one better in at least one of this weekend’s races.

Further down the championship standings the battle to get into the top six showdown is heating up, with the Buildbase BMW pairing of James Westmoreland and Jon Kirkham tied for sixth place with one-hundred points. With Ryuichi Kiyonari just ten points ahead of the pair, the pair will be looking to get their S1000RRs ahead of both each other and the Samsung Honda to see the team in the showdown.

With the weather forecast looking good and the racing in BSB as close as it is, it could definitely be worth a trip out to Cheshire this weekend…