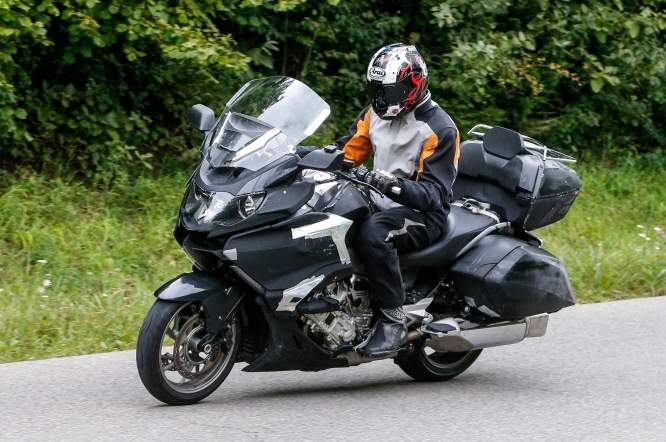 BMW’s in-line 6 super tourer gets a facelift for 2015 and we’ve got a shot of the production-ready model ready for its full debut later this month at the Intermot trade show in Cologne.

The GTL or ‘Bagger’ is both important for, and popular with, the US market and will replace the current model although it remains to be seen if this 2015 model will head to British shores, or even into Europe for that matter. We understand the GT version will remain mainly unchanged and it will be the focus for the European market.

Hot on the heels of BMW’s confirmation that five new models will be unveiled at the two coming trade shows, we bring you the first shot of the K1600GTL.

The visual upgrades to the GTL are fairly innocuous but include flatter exhausts to accommodate for the larger Harley-style aerodynamic panniers. Other aerodynamic styling upgrades include the front fairings and wing mirrors. The good old masking tape makes an appearance and lives up to its name to foil us from seeing the finer detail of the upper and lower fairing.

In a game of spot the difference, flatter pillion pegs and minor amends to the shape of the adjustable wind shield are other subtle differences but we do know that this fine tourer will get upgrades to its standard equipment with the inclusion of Dynamic Traction Control. The Hill Start Control from the R1200RT will be an option too and the bike will be available in two new colour options, Silver or Black which replace Red and Graphite from the current range. 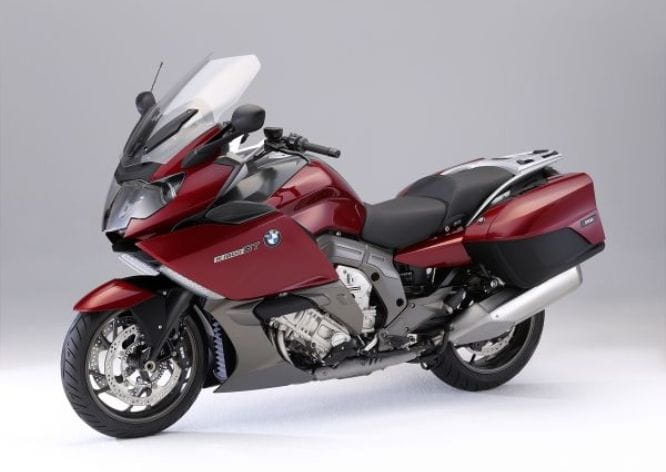 The current model of the luxury tourer weighs in at 348kg (wet) and starts at £17,800 has a wrath of BMW Motorrad’s most clever equipment which will be featured on the new version including the Duolever front suspension and Paralever at the rear. The optional ESA II (Electronic Suspension Adjustment) is adaptable at the touch of a button. Xenons, heated grips and seat, adjustable screen, cruise control and three power modes are all standard.

The test rider in the shot is tall which equally makes the seat look low and the bars high but the K1600 range has a standard adjustable seat height of 749mm or 780mm with a taller version available at no extra cost which can be set at either 800mm or 830mm.

Keep your eyes on Bike Social as we’ll be reporting live from the first of the season’s trade shows, Intermot, in Cologne on Tuesday, 30th October.