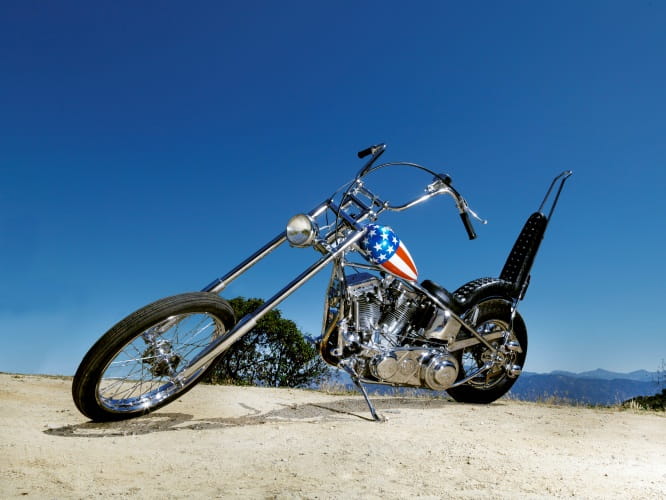 If you've got a spare £0.75m and fancy owning a piece of motorcycling history then here's your chance.

The iconic bike, a panhead chopper with chromed hard tail frame, was one of two built for the movie by custom bike builders, Cliff Vaughs and Ben Hardy, with input from Fonda himself. One was stolen and never recovered while the bike that was crashed in the final scene was rebuilt by fellow actor Dan Haggerty who was presented with it by Fonda after filming. It is now available courtesy of auctioneers, Profiles in History, on 17-20 October.

Once rebuilt, the bike was displayed for the following 12 years at the National Motorcycle Museum in Iowa and the Museum's Director has provided one of three signed letters of authenticity that substantiate the bike. The other two are from  Peter Fonda and Dan Haggerty.

“Captain America's stretched-out American-flag-adorned panhead chopper is one of the most iconic images in American film” “The bike evokes powerful emotions even in non-bikers. It personifies the 60's, all of the good and the bad that decade brought. This is an opportunity for someone to own a pure piece of nostalgic entertainment history.”

A portion of the proceeds will be donated to benefit the American Humane Association, a non-profit organization dedicated to the welfare of animals and children.