He can’t stay out of the headlines for too long with his political agenda but Nigel Farage MEP, the leader of the UK Independence Party (UKIP), has joined the Motorcycle Action Group (MAG), the volunteer-led riders’ rights organisation.

MAG President, Ian Mutch, told Bike Social “We’re not aligned with nor support any particular political party but he (Farage) is supporting us which is the important bit. We’ve got 35 MP’s who are MAG members and whilst he isn’t an MP, he does carry some weight.” 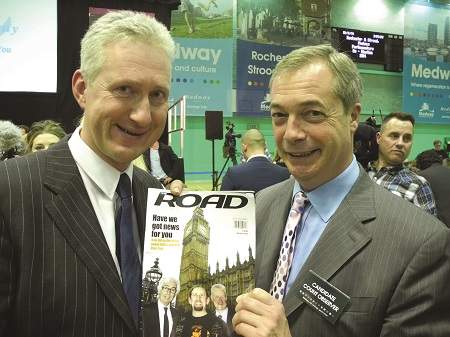 Farage doesn’t ride but is believed to have stood by a promise he made to Lembit Opik, MAG’s Director of Communications and Public Affairs. The pair met again at the recent Rochester and Strood by-election and Opik took the opportunity to remind Farage of his previous promise to join MAG the next time they met.

Opik said, "You don’t have to be a UKIP voter to recognise the significance of a man like Farage joining MAG’s ranks. Other party leaders have been approached, but Nigel has actually done something about it. With 1.5 million active riders, and another 4 million fully qualified motorcycle licence holders in the UK, there are a huge number of electors who care about riders’ rights. So often, they’ve been frustrated by the lack of political respect and attention given to users of powered two wheelers, despite the obvious benefits in terms of reduced pollution, reduced cost and reduced congestion compared to a car. More forward-looking MPs already get it, which is why we have so many friends in Parliament.”

Good thing, bad thing or a nothing?